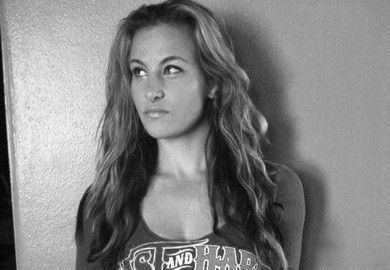 “Miesha and I know each other real well. I hate the bitch and she is secretly in love with me. I can tell just the way she looks at me and all that shit. She can’t leave me alone, you know what I mean? I know she has a big crush, but we’re never getting together. I’m not into her, you know? She’s disgusting. No, I don’t know. I don’t care what she says. She’s got her nose in everyone’s business, so I think it’s fucked up to say since I hadn’t even fought yet, it’s already dropping her little seed in Dana’s ear. I’m going to knee her in the cooter for that one, you know what I mean? I’m going to knee her or something really hot. I’m going to go crazy. I’ve been wanting to fight her for a long time. That would be a great fight. She’s friends with one of my exes, so apparently she knows every single thing about me. But she knows everything about everyone else in the sport, so Miesha digs her own grave everywhere. I have always not liked her and I’ll continue to not like her, so she can say whatever she wants.”

TUF 18 contestant, Tonya Evinger, is steaming mad over Miesha Tate’s attitude. The female fighter was invited to ‘The Ultimate Fighter’ season 18 taping only to lose in the opening round to BJPENN.COM Blogger, Raguel Pennington.