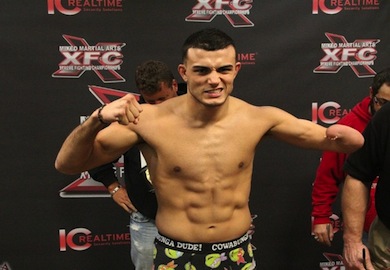 Popular WSOF lightweight fighter, Nick Newell (pictured), has been pegged for a shot at the promotion’s lightweight title, currently held by Justin Gaethje.

Gaethje vs. Newell will go down at a yet to be announced venue and date, but BJPENN.COM confirmed earlier today that the bout will go down this July.

Newell is an undefeated prospect who has defied the odds in route to his title shot. Boasting an 11-0 record, Newell made his WSOF debut last August and after two first-round submission wins, the WSOF brass have called him up for a title shot.

Gaethje is another hot prospect with a lot of momentum on his side. Not only is he the current WSOF lightweight champion, he’s also undefeated and went through a gauntlet of former UFC fighters to get there.

The official date and location of this bout is supposed to be announced by the WSOF shortly.