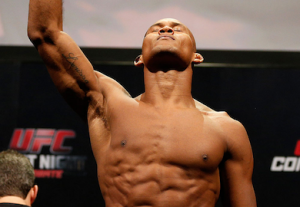 “Whoever wins, I want to fight one of them to get to the title as soon as possible.I believe I’ll be 100 percent ready to fight in August to show that the best ‘Jacare’ has yet to come. They are both great athletes. Bisping has good movement, he’s a dangerous guy, and Kennedy is strong, has heavy hands and a kind of weird game. When it looks like he’s going to throw a kick, he punches, and when it looks like he’s throwing a punch, he kicks. And he has a great wrestling.”

In a release (via mmafighting.com), Ronaldo ‘Jacare’ Souza put both Bisping and Kennedy on notice.

Michael Bisping and Tim Kennedy square off On April 16th, in Quebec, Canada.