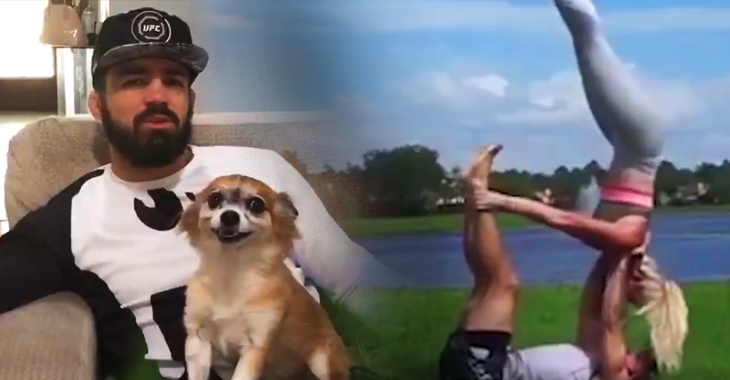 Mike Perry is a madman. The only thing more reliable than his controversy, is his strong and violent performances in the UFC. He’s quickly become a fan favorite and looks to keep wreaking havoc in the welterweight division. It may surprise you after some of the threats he’s made against his opponents that the dude has a soft side. However, it’s one weakness that a lot of men have: Their girl and their dog. Mike Perry recently showed how him and his girlfriend Danielle Nickerson keep in shape together.

I challenge all my home boys to grab their girls , pick them up and spin em around. Build strength and Love 🙏🏼 https://t.co/JI4hTLPyMF

Could this be the new workout trend for UFC fighters? For @PlatinumPerry, this is how he gets better. You down to try this out? pic.twitter.com/BOSM2ArSHZ

That looks like some good active recovery and a way to keep limber, also some nice bonding time with your significant other. He even challenged other fighters to do the same. Could this be the new movement coach trend of MMA? It wasn’t long after Conor McGregor started dodging pool noodles that it seemed like everyone had on in their open workout.

If you couldn’t help but notice, Mike Perry is petting an adorable little doggy that rates a 10/10 on the good boy and/or girl scale. Unfortunately, it looks like the cute pupper is getting up there in years and may not be with Mike Perry for much longer. This prompted Perry to ‘get real’ on Twitter. Dogs truly are man’s best friends. Who are we kidding? We don’t know where that phrase came from, but dogs are everybody’s best friend.