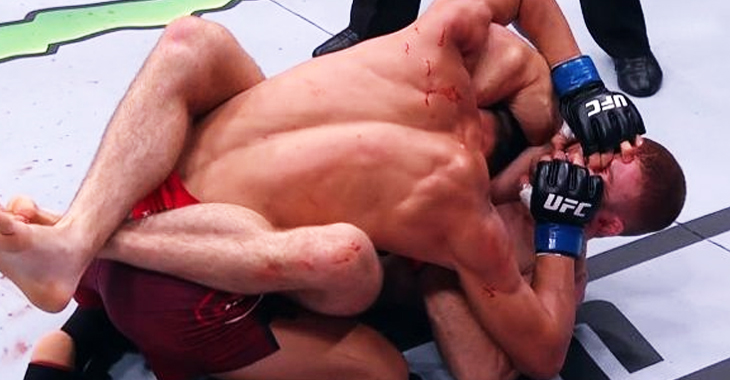 With as many awesome things that happened at UFC 221, it’s still hard to move on from that absolutely egregious eye gouge that Li Jingliang did to Jake Matthews to get out of a guillotine choke. While Matthews was all class about it after the fact, it hasn’t stopped fans, media and other fighters from scolding Jingliang for the foul. Joe Rogan recently spoke up about it on his recent show and wasn’t happy about what he did in the very least.

“I thought it was f-cking bullsh-t. You can’t let a guy get away with that, or he’s going to do it again. […] You don’t do it that way. You tap. It’s straight up cheating; it’s not just shady. It’s cheating. They should tell him, ‘If this ever happens again, if you ever think you’re going to do this again, we’re going to kick you out of the league.’ You can’t do that. You can’t gouge someone’s eye when they’re choking you. It felt like the fingers were in long enough for him to know the fingers were in there. The referee f-cked up. The UFC should do something. Someone should do something.”

“You’ve got to look at that and go, ‘Hey man, you can’t ever do this again and we have to fine you. You should be suspended, and if you ever do this again, you’re out.’ You can’t gouge someone’s eyes. They’ll lose their vision. We can’t have any leniency whatsoever toward intentional eye-gouging. Zero. Every time an eye-poke happens, whether it’s intentional or not, take a point away. I think it’s a good move. Eye-gouges like that, I think is grounds for disqualification. You can’t allow any room for that. Guys are going to get blind. It could happen. Most guys are completely ethical and would never think of doing this.” – Joe Rogan on his Joe Rogan MMA Show.

During the fight, Li Jingliang was only warned about clawing at Jake Matthew’s eyes. He was also awarded $50,000 along with Matthews after their scrap was awarded ‘Fight of the Night’ honors. While his opponent was cool with it and wasn’t hurt, Joe Rogan is completely right that this could have resulted in a serious injury and the referee — as well as the officials — need to protect fighters from fouls like this. It could affect the rest of a fighter’s career and quality of life.