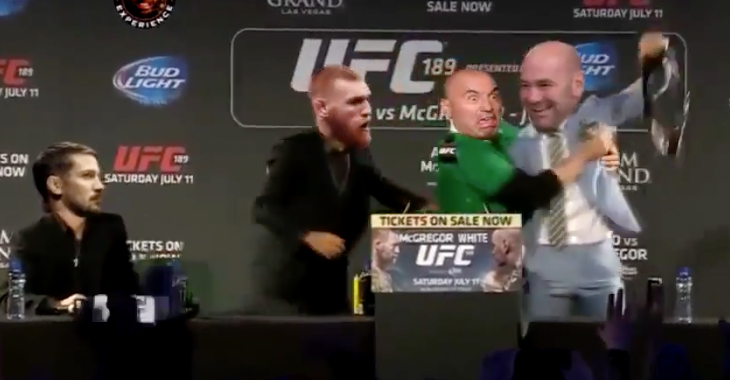 Over the weekend it was announced that UFC superstar Conor McGregor chose to “relinquish” the UFC featherweight title and hold on to the UFC lightweight strap.

“The Notorious” was the first fighter in history to be a concurrent two-division UFC champion after beating Eddie Alvarez at UFC 205 earlier this month. McGregor held both the UFC featherweight and lightweight titles for two weeks after winning the belt from Alvarez.

UFC President Dana White had stated on multiple occasions prior to UFC 205 that McGregor would have to decide which division’s title he would choose to vacate and it turns out it was the 145-pound title that the Irishman decided to let go.

So Conor McGregor has had the featherweight title taken away from him.

Crazy how the tables have turned! pic.twitter.com/5PgGTgxwvM

If you’re not familiar with the original video, Conor McGregor got up and snatched the belt from then-featherweight champion Jose Aldo at the UFC 189 World Tour press conference in Dublin, Ireland back in 2015. With taking time off to have his first baby and also demanding some shares in the UFC to continue fighting, fans are all anxiously awaiting to hear what will be next for “The Notorious.”

Let us know in the comment section what matchup you want to see next for UFC superstar Conor McGregor!