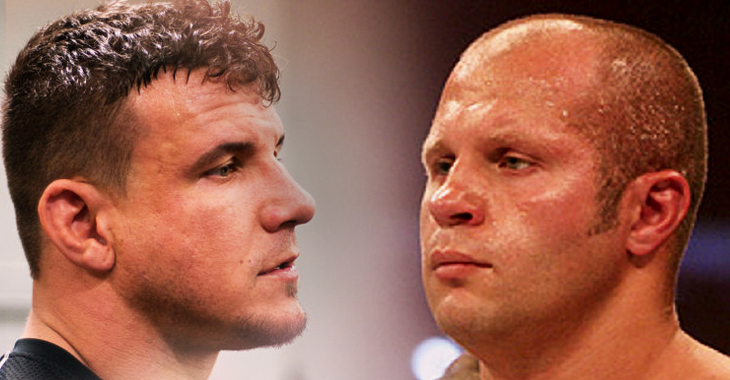 Former UFC heavyweight champion Frank Mir finally has a chance to fight one of the very best fighters of all time. Bellator has turned back all the clocks to the ol’ glory days of MMA when the grand prix tournament was still king. They’ve also brought in fighters that have never gotten a chance to face each other in all their years of being in the sport. One fight has already gone by with Chael Sonnen and Quinton ‘Rampage’ Jackson and they’ll be another one in between Mir fighting Fedor Emelianenko. While many feel he’s passed his prime, Mir assures everyone that Fedor is still Fedor.

“Damn, that’s a tough first fight. No joke, Fedor [Emelianenko] is still a phenomenal fighter. I know a lot of people don’t have the eyes that I have and they look at him and go, ‘Well, look at his results.’ And that’s easy to say in our sport, you know. […] Fedor is extremely good. He’s still very quick. He hasn’t lost his power in his punches. Even when he threw the punch against [Matt] Mitrione, Mitrione fell down. Mitrione’s a big kid, y’know, a big guy. I think the difference I try to explain to everybody, [people will say], ‘Well, he used to be unbeatable.’ Yeah, that’s not because he’s gotten worse. Everybody else has gotten better.”

MMA legends Fedor Emelianenko and @thefrankmir face off ahead of their Bellator heavyweight tournament fight 👊. Who do you think will pass to the next round? pic.twitter.com/ka2GHMAbVA

“Out of the options of who I had to fight here, absolutely [Fedor is the guy that I wanted]. Not because he’s the easier of the fights — there are some very dangerous guys in there — the reason being is it guarantees that we do fight each other. That’s why I thought it was an excellent idea. I never once hesitated. […] He’s only wrestled with guys with my submission ability a short amount of time. Very few and far between. He’s had mixed results with that. Fought [Minotauro] Nogueira and was able to avoid being submitted. Fought [Fabricio] Werdum and it didn’t end up so well. Werdum was a fighter in the UFC for quite some time and I still have almost twice as many submissions as he does. So, when it comes to taking a limb, I’m still the king.” — Frank Mir speaking to MMA Junkie.

Can you imagine if Fedor signed with the UFC and Frank Mir never got in his tragic motorcycle accident back when he was UFC champion in 2004? We never got it then when they were the consensus best heavyweights in the world, but we get it now on April 28th in Bellator and one of these legends will have the chance to become the new Bellator heavyweight champion. As far as Mir is concerned, he’s taking the belt and a limb with him.