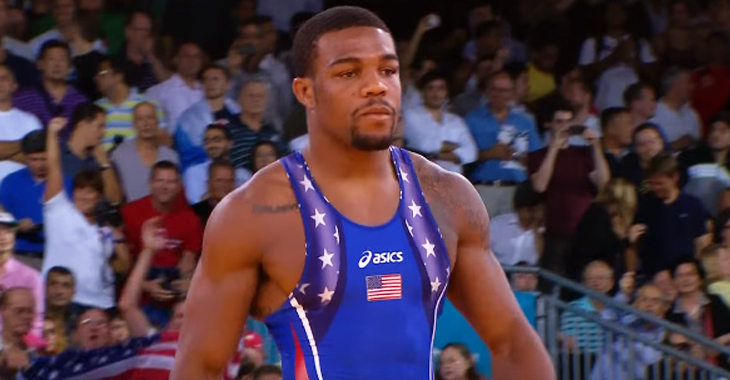 In MMA, the search for the next big thing is never ending. Sometimes they work out, other times they never rise to the marketed prophecy of what they were made out to be. Two-time Olympian Jordan Burroughs could be just that. After Floyd Mayweather recently stood inside of an Octagon and teased his MMA jump in a clever ad for Paddy Power, Burroughs recently did the same thing asking, ‘What are the odds?’ According to what the four-time world champion said back in 2013, the odds aren’t that great.

“With all due respect. Each fighter has a respective discipline. Whether it be wresting, jiu jitsu, boxing, etc. I think we all can agree that no one in the UFC is the best in the world at his or her respective discipline. Of all the fighters in every organization, there are no Olympic Gold medalists competing. Why would there be? If you were the the best in the world at your respective discipline would you leave to pursue a completely different sport? Probably not. I could be completely wrong, but from my observation most people get into MMA for the financial opportunities.”

What are the odds? pic.twitter.com/EFID0Hx011

“Their respective sport may have grown stale and the paychecks weren’t exactly rolling in. They were relatively unknown and they wanted to use their athletic ability to give them a taste of the good life. Sound familiar? Who wouldn’t want millions of fans and millions of dollars? Perspectives can change quickly, however. I have a wife. I’m healthy. I am great at what I do. I am fortunate enough to pursue what I love everyday. I always promised myself I would never do anything purely for money, so when it comes to persuading me to change my mind strictly for a large contract offer… Forget about it.” — An excerpt from Jordan Burroughs’ own ‘Why I Chose Wrestling Instead of MMA’ blog.

The photo was taken as Jordan Burroughs was invited by UFC light heavyweight champion Daniel Cormier as a guest coach for the big season of The Ultimate Fighter, ahead of his gigantic fight with UFC heavyweight champion Stipe Miocic. Along with Javier Mendez, Cain Velasquez, Deron Winn, Bob Cook, Rosendo Sanchez, and Leandro Vieira, Jordan Burroughs joins a mind-blowing cast to teach the next generation of fighters. If that’s not enough, Luke Rockhold is expected to also have a guest coaching spot.

The Man! @alliseeisgold Jordan Burroughs stopped by the ultimate fighter today. What an honor, the boys absolutely loved it!!! Thanks JB! @usawrestling #champ #5xchamp pic.twitter.com/cAJY77TVVo