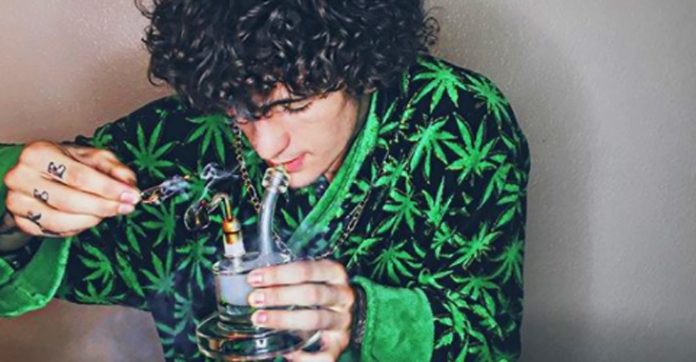 In the blink of a bloodshot eye, ‘Suga’ Sean O’Malley has lifted himself high onto the main card of a pay-per-view. His blazing performance against Terrion Ware placed him just under the co-main event slot against Andre Soukhamthath at tomorrow’s UFC 222. O’Malley plans to puff, puff, and pass through the former CES MMA bantamweight champ and celebrate in Vegas. When the smoke in the Octagon clears, Sean O’Malley plans to spark up once again at the after-party with his own custom strain.

“We’re releasing the new strain, Suga Show OG. It’s a mix between Lemonhead and OG 92. I think they’re going to bring a good amount of that. They’re gonna have dab rigs set up. We’re gonna have a juice bar. The ultimate recovery: Smoking some weed and drinking some veggies. I’ve never been more excited to go knock someone out. It’s on a pay-per-view card, it’s at T-Mobile. There’s going to be millions of people watching it. I love proving people wrong. […] You need to buy the PPV to witness this hype train is real. I’m going to go out there and prove everyone who is calling this fake wrong. I’m going to go out there and get another viral knockout.”

Stick around after @criscyborg open work out , might see me there 👊🏼👊🏼

O’Malley is wearing his marijuana robe. This is great.

You don’t even have to be under the influence for Sean O’Malley to blow your mind. For some reason, he wasn’t given an open workout slot at media day, so he just wore a marijuana robe and crashed the event anyway. The UFC is always in constant need of a flashy fighter with personality and O’Malley is their plug. He’s everything the promotion looks for the we all know everyone loves a huge dose of THC: Totally hyped contender.