This weekend, the UFC returns to sparkling Las Vegas, Nevada with UFC 209. The card is stacked to the brim with top talent.

In the main event, we’ll see welterweight champion Tyron Woodley take on challenger Stephen “Wonderboy” Thompson in a do-over of their thrilling UFC 205 majority draw. The co-main event, meanwhile, will pit undefeated Dagestani star Khabib Nurmagomedov against the streaking Tony Ferguson in an interim lightweight title fight. Elsewhere on the card, we’ll be treated to a heavyweight rematch between Alistair Overeem and Mark Hunt, a clash of lightweight strikers in David Teymur and Lando Vannata, and the middleweight debut of Rashad Evans, who takes on Australian judoka Daniel Kelly.

In advance of this stacked UFC 209 card, the UFC has released the latest instalment of its popular series UFC Countdown series. This episode, which can be viewed in full at the top of this post, shines a light on the training camps and home lives of Woodley, Thompson, Nurmagomedov and Ferguson.

Prior to his draw with Thompson, Woodley was on a three-fight win-streak, having knocked out Dong Hyun Kim, decisioned Kelvin Gastelum, and clobbered Robbie Lawler to win the UFC welterweight title. Thompson, meanwhile, entered his first bout with Woodley on a seven-fight streak, highlighted by defeats of Robert Whittaker, Patrick Cote, Jake Ellenberger, Johny Hendricks, and Rory MacDonald. 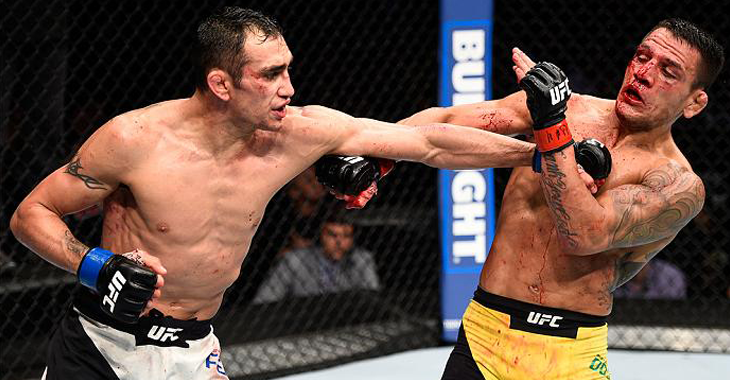 Nurmagomedov will enter his co-main event title fight with Ferguson with a flawless 24-0 record. His latest win occurred in November, when he scored a third-round submission win over the dangerous Michael Johnson. Ferguson, meanwhile, will step onto the canvas on an incredible nine-fight streak. His last win also occurred in November, when he defeated former champ Rafael Dos Anjos in a thrilling, five-round battle. The winner of this bout is likely to take on undisputed lightweight champ and MMA mega star Conor McGregor sometime down the road.

Who do you think comes out on top in UFC 209’s main and co-main events? Sound off, PENN Nation!