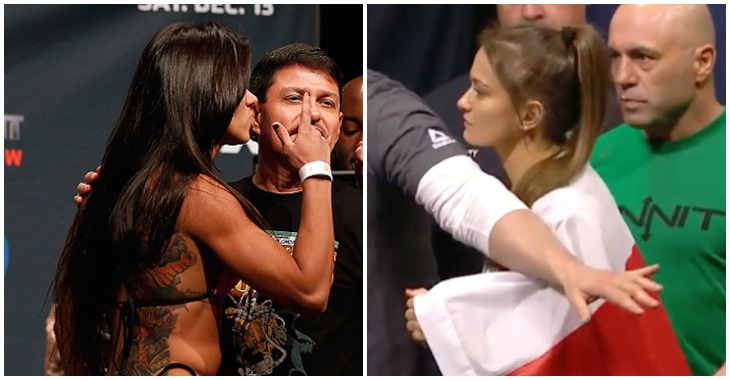 Earlier this month, reports of a planned strawweight bout between former title challengers Claudia Gadelha and Karolina Kowalkiewicz began to surface. While we knew this was a fight both women wanted, however, it was not known for sure if they would actually fight.

Now, it’s official. On Monday morning, the UFC announced that this key strawweight showdown will occur at UFC 212, in sun-soaked Rio de Janeiro, Brazil on June 3.

Brazil’s own “Claudinha” Gadelha will enter this bout having recently scored a lopsided decision win over the dangerous “Cast Iron” Cortney Casey. This win separated Gadelha from a close decision loss to reigning strawweight queen Joanna Jedrzejczyk, which also happened to be one of the best fights of 2016. Prior to this los to Jedrzejczyk, Gadelha scored another dominant decision win over former World Series of Fighting champ Jessica “Jag” Aguilar.

Kowalkiewicz, meanwhile, was last seen in action in November, when she came up short in her own title shot against Jedrzejczyk. This marked the first loss of her career. Prior to her failed title shot, she went 10-0 as a pro mixed martial artist, scoring UFC wins over respectable talent in Randa Markos, Heather Jo Clark and Rose Namajunas.

At the moment, not much else is known about this Brazilian card, though we can probably expect Gadelha and Kowalkiewicz’s battle to be featured on the pay-per-view portion of the bill. We can also expect the winner of this fight to be a frontrunner for the next shot at the winner of Joanna Jedrzejczyk and Jessica Andrade’s looming strawweight title fight, which is scheduled for UFC 211, which goes down on May 13, Dallas, Texas.

Who do you think comes out on top in this now official Karolina Kowalkiewicz vs. Claudia Gadelha strawweight bout? Do you think the winner deserves another crack at the UFC strawweight title? Sound off, PENN Nation!