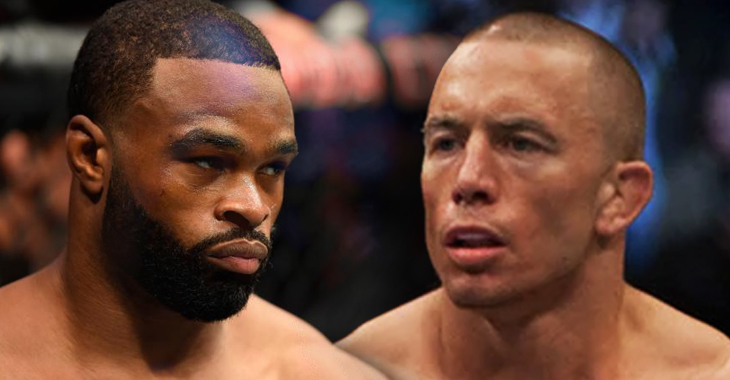 While Tyron Woodley recuperates from his shoulder surgery, welterweight contenders are pacing back and forth itching at their shot to try and take his gold away from him. Rafael dos Anjos feels like he has earned it with his dominant performance against former champ Robbie Lawler, but Woodley already told him he has other plans. Colby Covington has had Woodley’s name in his mouth since his win over Demian Maia, but T-Wood thinks he doesn’t deserve it. What the UFC welterweight champion wants is to prove he is the best of all time. Something he can only do against Georges St-Pierre.

“I’d say that’s my big prediction for 2018. Big prediction for me is I fight Georges St-Pierre on my first fight back. Georges, my shoulder is sore. I can’t even punch. Georges, I can’t even punch. I can’t punch.Georges, it’s hard to sleep. Georges, if you want to fight me brother, this is the time. If you want to get me Georges, it’s right now. He’s a G. He would exit the sport and nobody would give him that much stuff for losing to me.”

“You think Georges [St-Pierre] wants to fight me? You think Georges wants to fight me? Georges had the chance to fight me before [Michael] Bisping. He chose to fight Bisping. It was definitely a better fight, because if would have came back against me looking like that, Georges would have been right back in retirement. He did not look great. Bisping did not look great. One thing that helped Georges in that fight was his experience. He loosened up. He was a little uptight. He hadn’t been in the Octagon in what, 4 years almost?” — Tyron Woodley speaking on the Joe Rogan Experience MMA Show.

This isn’t the first time Tyron Woodley has campaigned for a superfight with Georges St-Pierre, but this is probably the closest it could be from happening. St-Pierre vacated the UFC middleweight title for health concerns related to gaining the weight to move up, which means it is either retirement or back to the welterweight division. It’s hard to think of a bigger fight at welterweight other than Tyron Woodley, if a fight with Conor McGregor is off the table. Coming back and potentially winning the welterweight title after all those years against the current champion is the type of legacy-defining spectacle that only makes sense for St-Pierre if he stays in the sport. For Woodley, the chance to prove he’s the 170-pound GOAT is too great to let go.