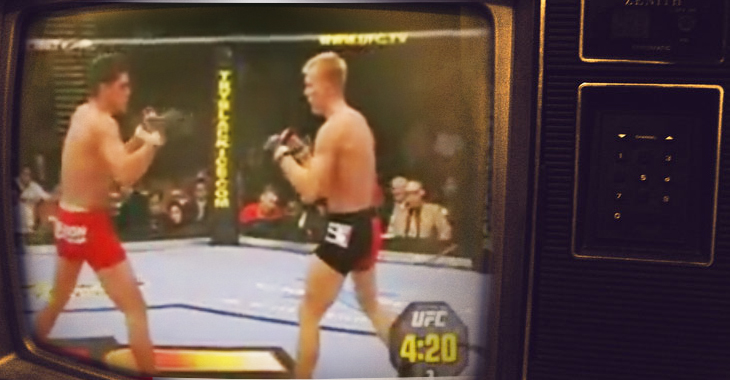 A lot of images and feelings come to mind when the name Nick Diaz is brought up. He’s shadow boxed during awkward interviews right into our heart for many years. He could usually be found constantly looking over his shoulder, most likely after ridiculously exciting fights. Lately though, anti-doping violations caused by marijuana has simultaneously nearly ended, and revitalized his career. His suspension has long been up, but he neglects to pay the rest of his fine, instead spending his time making bank off of appearances and many partnerships with cannabis companies. Let’s travel back to a simpler time when Diaz was walking opponents down and pressuring them with his boxing until things inevitably end on the ground.

A whole entire teenager ago, Nick Diaz made his UFC debut by submitting Jeremy Jackson. This was actually the end of a trilogy between the two, which featured Jackson finishing Diaz in the first fight and Nick paying him back in the second. This armbar at UFC 44 was three years before Nick Diaz’s legendary war with Takanori Gomi, where he endured multiple hadoukens in order to beat one of the best lightweights in the world. …Until it was overturned because of mutant levels of THC. Shortly after the PRIDE 33 battle, he’d go on his 11-fight win streak featuring a victory over the legend himself, BJ Penn.

Nick Diaz received a rematch with Jeremy Jackson the following year. Nick displayed improvement, as he was able to win the fight by TKO. pic.twitter.com/2imshH640v

We haven’t been able to enjoy Nick Diaz in the Octagon since his infamous fight with Anderson Silva, but we can always hope he marches back in someday with both middle fingers in the air, ready for a killed-or-be-killed encounter. Who knows, if Conor McGregor beats Nate Diaz again, maybe Nick can come back for some revenge. That or a rematch with Georges St-Pierre would be sure to sell some (wolf) tickets.