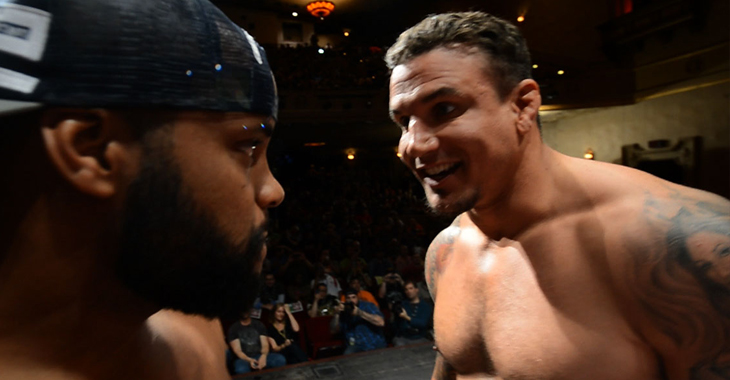 Daniel Cormier is taking a break after a roller coaster ride of chaos after losing to Jon Jones at UFC 214, then getting back his UFC light heavyweight title only a little while later. He’s going to take a much-needed rest for at least six months, before coming back to defend his belt against Alexander Gustafsson or Volkan Oezdemir. Or, who knows? However, it’s another fighter that has just gotten Cormier’s attention again: Former opponent Frank Mir.

While this tweet seems completely out of the blue — especially since Frank Mir is in Bellator now and still a division heavier than DC — it might have something to do with comments Mir made after Daniel Cormier’s loss to Jon Jones. Coming to after the fight being brutally stopped, Cormier was visibly emotional in his post-fight speech at UFC 214. Back at the end of July, Frank Mir criticized Cormier for it on his podcast.

“Here’s the time that it is unacceptable to cry, and that is when someone kicks your ass. I’m sorry, we still live in a very masculine — well, we should — thought of how a man should operate. After one man kicks your ass on the school yard and you start bawling in front of everybody, it looks bad. […] And [Daniel Cormier] cries anyways. We’ve seen it after the first loss. When he was walking down the hallway, he embraced Cain Velasquez, put his head on his shoulder and started crying. I got punched by Dos Santos several times in the head and I still managed to keep that thought, ‘Don’t bawl in front of everybody!’ […] I think the parameters of when it’s okay for a man to show emotion, and when it’s inappropriate for him to show emotion — I think you can understand what I’m saying. When another man kicks your ass, I feel that we can all probably come to the conclusion that that is not the time to show emotion.” — Frank Mir on his own Phone Booth Fighting podcast.

After running through the Strikeforce Heavyweight Grand Prix, it was off to the UFC. Daniel Cormier earned a decision win over Mir in his UFC debut, in one of his last fights in his original division. While it’s unlikely DC would face-off with Mir again in an Octagon, never say never. From the sounds of that Tweet though, it may not matter where Daniel Cormier runs into Frank Mir next, they could just scrap on sight.