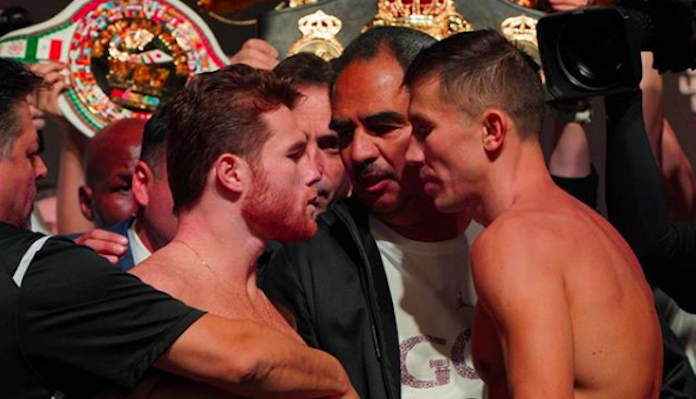 Gennady Golovkin was asked a ruthless question regarding Canelo Alvarez during today’s press conference for his upcoming bout with Steve Rolls.

Golovkin (38-1-1, 34 KO’s), who lost his WBA, WBC and IBO titles to Canelo via controversial decision in September 2018, was asked the following eyebrow raising question at today’s presser.

“Considering the contract you signed, and the contract that Canelo signed, do you feel like the judges screwed you out of about 200 million dollars?”

‘GGG’ responded to the reporters gutsy question with the following statement.

“You know, I just know only my contract,” Golovkin explained. “I don’t think about Canelo contract. How many or how much. I am very happy because I have a big deal, probably the biggest deal for my career and I’m just, I’m very happy.”

Check out the video below (via Michael Benson on Twitter):

Gennady Golovkin will return to the boxing ring on June 8 at Madison Square Garden for a fight with Canadian Steve Rolls.

As for Triple G’s bitter rival, Canelo Alvarez (51-1-2, 35 KO’s) will return to action tonight in Las Vegas for a middleweight title unification bout with Daniel Jacobs.

Canelo will receive a massive payday for his efforts, get all of tonight’s fighter salaries here.

Do you think we will see a trilogy bout between Canelo Alvarez and Gennady Golovkin in the near future? Sound off in the comments section PENN Nation!