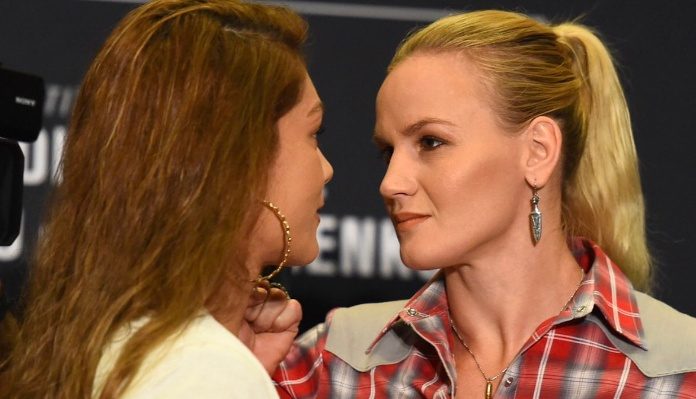 It has quickly become quite the ‘Big drama show!’ when it comes to the women’s 125-pound weight class in the UFC. And now we’re left wondering what’s next.

On weigh-in day for UFC 228 this past weekend, mid-weight cut the then champion Nicco Montano would be hospitalized due to issues with her kidneys resulting in a cancelation of her scheduled title defense against Valentina Shevchenko.

Later that day, the inaugural champion Montano would be stripped of her title and it would be made clear that Shevchenko will vie for it at a later date against someone else.

After hoping for this fight to happen sooner than it was supposed to, Shevchenko spoke on Ariel Helwani’s MMA Show and expressed that she thinks she’s finally just going to move on from her would-be opponent.

She also said that she would be open to a very interesting opponent option for her vacant title matchup.

There hasn’t been too much hinting as to who Shevchenko’s next opponent will be when she fights for the vacant title but it seems like a pretty safe bet that the UFC will want to make the biggest fight possible. Which would be her vs the former strawweight queen Joanna Jedrzejczyk despite the fact that isn’t a flyweight.

There are plenty of options, but the groundwork has already been and is continuing to be laid out for this fight to happen.

The two have already met three times in Muay Thai bouts that all saw Shevchenko walking away victorious. Ar UFC 213 when Shevchenko lost Amanda Nunes due to complications with her weight cut (coincidentally), Jedrzejczyk was looking to be the fighter to step in and take on the 135-pound title challenger on just one day’s notice. The only problem being that she couldn’t get cleared in time.

Now a perfect chance for the fight to be made is right in front of the UFC…it just depends on if they’ll be able to set it up.