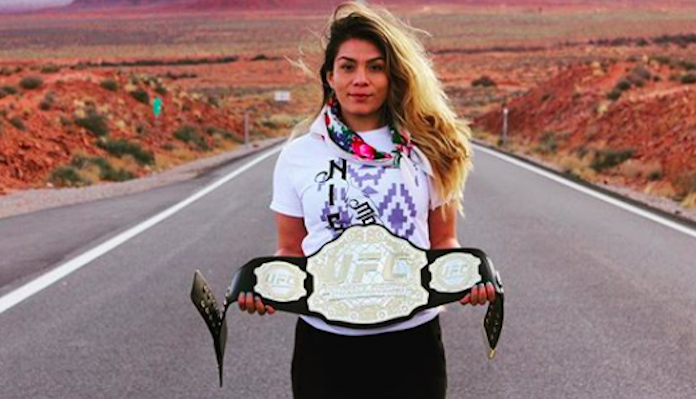 Even though many expected the title reign of the inaugural UFC flyweight champion to end very soon, no one saw it coming in this fashion.

After being hospitalized in the midst of her weight cut due to issues with her kidneys, the champion Nicco Montano was pulled from her scheduled title defense against Valentina Shevchenko for tomorrow night’s UFC 228 co-main event.

Despite the health concerns which are reminiscent of Amanda Nunes’ back at UFC 213 heading into her rematch with Shevchenko, Montano has now been stripped of her title according to Aaron Bronsteter and later confirmed by Dana White himself.

Valentina Shevchenko will fight an opponent to be determined at a later date. They have an opponent in mind, but nothing is confirmed.

Montano earned the flyweight championship by winning her way through season 26 of The Ultimate Fighter where she would defeat Roxanne Modafferi in the finals by unanimous decision in December.

The now-former champion would enter the fight with a broken foot that would only worsen throughout the fight and put her on the shelf for the majority of this year.

The plan for Montano was always to have her first defense be against Shevchenko but now it seems like she won’t be getting the chance to throw down with her would-be challenger anytime soon.

Of the next in line options at 125-pounds, there is the No. 3 ranked Katlyn Chookagian who Shevchenko was actually asking to fight after she heard the news herself. Whether or not this matchup will be made next remains to be determined.

Other bolder and more out of nowhere options could be the former strawweight champion, Joanna Jedrzejczyk. And who knows, this could actually be the most likely case considering the current UFC landscape.