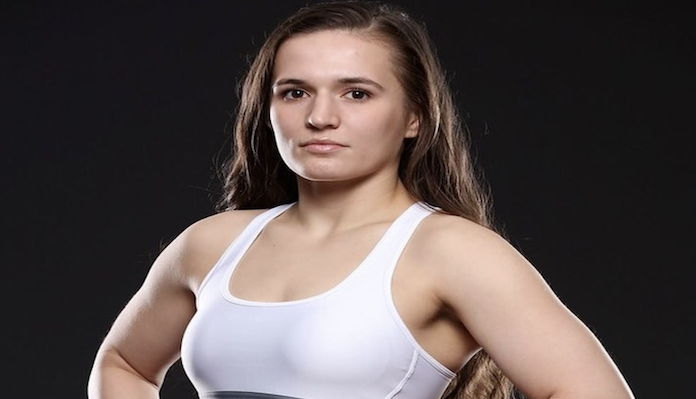 Women’s flyweight prospect Erin Blanchfield has issued a statement after signing with the UFC and having her fight booked on short notice.

Blanchfield is just 21 years old and she has already racked up a 6-1 record in mixed martial arts since making her professional debut in 2018. After starting off her MMA career with a TKO win in CFFC, Blanchfield was quickly scooped up by the all-women MMA promotion Invicta FC and she picked up two wins, including a majority decision victory over current UFC fighter Kay Hansen. After dropping a controversial split decision loss to Tracy Cortez, another current UFC fighter, Blanchfield returned to CFFC and picked up another stoppage win, before re-joining Invicta FC and picking up two more victories in that organization.

Many fans and analysts in the know have been hyping up Blanchfield as a potential future UFC fighter for quite some time now, and we will finally get to see her get to work inside the Octagon. On Thursday, Blanchfield signed a contract with the UFC and will take on Norma Dumont on short notice at next weekend’s UFC on ABC 2 card, filling in for Bea Malecki. That fight will take place at 135lbs, but Blanchfield will return to flyweight afterward. After signing, “Cold Blooded” took to her social media to issue a statement.

UFC debut, April 10th Thank you to @shanknapp for letting me take this opportunity. And thank you to @invictafc as a whole for helping me grow and develop as a fighter. Let’s get it

Turning just 22 in May, Blanchfield is already among the youngest fighters on the UFC roster, but don’t let her age dissuade you. She is a talented fighter who has been UFC-ready for quite some time, and it will be interesting to see how she performs next week.

How do you think Erin Blanchfield will fare fighting in the UFC?