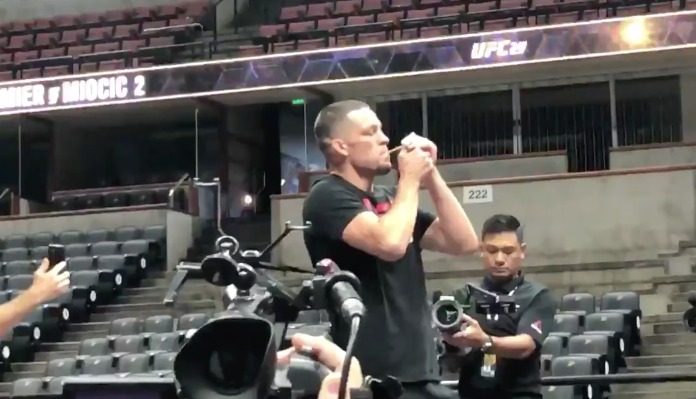 Nate Diaz is back fighting after more than three years away from the Octagon. His reason for not fighting is unknown, but nonetheless, he is back.

At UFC 241’s open workouts on Wednesday, Diaz took the stage and lit what appears to be a blunt and smoked it in front of the fans. If that wasn’t enough, the fan-favorite then passed it to the fans in attendance.

Nate Diaz sparks a joint and shows off his lung capacity. pic.twitter.com/KuiKYSAJnh

.@NateDiaz209 passed his blunt out to the crowd…we had to get an on the spot review of the product! #UFC241 pic.twitter.com/KzUWABFxH3

This is not the first time Diaz has smoked something at a UFC event. Following UFC 202 at the post-fight press conference, he was smoking a CBD vape pen and had the following to say.

“It helps with the healing process and inflammation and things like that, so you want to get these for before or after the fights in training,” Diaz said. “It’ll make your life a better place.”

Diaz is very much into the CBD business and said he is the main reason the UFC partnered with Aurora Cannabis.

As for his fighting career, Nate Diaz will return to the cage this Saturday in the co-main event of UFC 241 to take on Anthony Pettis. This is a fight the Stockton-native has been wanting for a long time, as he and “Showtime” do not get along. Duke Roufus, the former lightweight champion’s coach, alleges that Diaz tried to jump Pettis in a night club.

“For years Nate has just attacked him,” Roufus said on Ariel Helwani’s MMA Show. “Not only verbally, but even in a nightclub, they tried to jump him, him and Nick. It gets to a point where stuff just boils over.”

Regardless, it should be a very exciting fight, and if Diaz’s open workouts have anything to say, he is still partying and enjoying the cannabis industry.

What do you make of Nate Diaz smoking a blunt at the open workouts? Sound off in the comment section, PENN Nation!