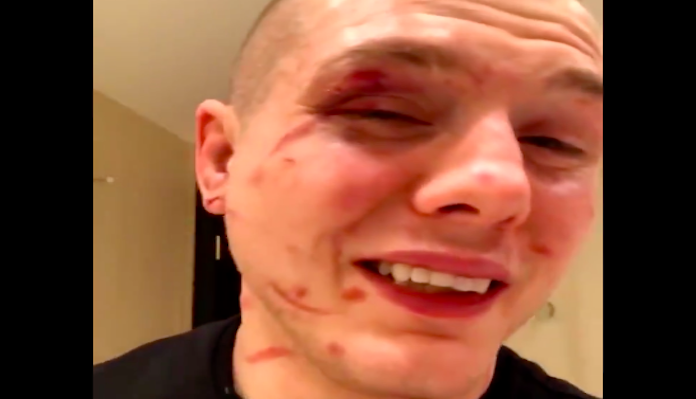 UFC middleweight Marvin Vettori revealed the facial injuries from the Jack Hermansson fight feel “like he had a knife in his glove.”

Vettori and Hermansson set a UFC record for the most combined significant strikes landed in a middleweight fight ever. Both men went to the well, taking the fight into deep waters and trying to get the knockout with every last swing. Ultimately at the end of 25 minutes, Vettori was given the nod by the judges on the scorecards. It was a close and competitive fight and both men landed some good shots, but Vettori landed the more significant strikes, including a big knockdown in the first round.

While Hermansson definitely took some damage in the UFC, Vettori is also wearing it. Taking to his social media the day after the fight, Vettori shared a video of the facial cuts that he endured during the match with Hermansson. Check it out.

“Bro, I get the punches man. Like, it’s all good but what are these f*cking scratches man? It’s f*cking crazy. I got slashed up. Like he had a knife in his gloves,” Vettori told his fans in the video.

Vettori will obviously need to take some time off to heal up from the facial cuts suffered in the fight with Hermansson, but when he does return to the Octagon next year, he figures to fight a top-flight opponent in his return to the cage. Vettori just beat Hermansson who was ranked at No. 4 in the world, so he is definitely going to be fighting someone in the top-five in his next fight. UFC president Dana White admitted that a matchup against Paulo Costa is something that intrigues him.

Where do you rank Marvin Vettori vs. Jack Hermansson on the list of this year’s best fights in the UFC?