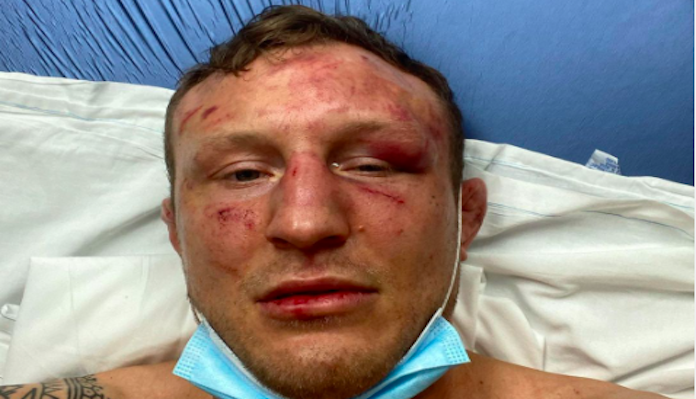 Hermansson and Vettori met in the main event of Saturday’s UFC Vegas 16 card. The two middleweights traded shots and grappling exchanges for 25 minutes as they went the distance in one of the best fights of the year. Both men proved in the battle that they are two of the best in the world at 185lbs, but Vettori proved to be a little sharper as he won a closely-fought decision. Although Hermansson lost the fight, it was an awesome battle.

Following UFC Vegas 16, Hermansson took to his social media to release a statement on his condition after the fight. The big Swede said that he broke his toe and he broke his eyesocket in the fight, but still has a great attitude despite the injury-inducing defeat. Check out what “The Joker” wrote on his Instagram following the loss to Vettori.

Broken toe and broken eyesocket but not a broken spirit. The goal remains the same Thank you for your support. #thejokerdominates

Hermansson was ranked No. 4 in the UFC at 185lbs heading into the fight, while Vettori was No. 12. Hermansson figures to drop a few spots in the rankings, but he shouldn’t drop too far. Although he did lose a unanimous decision to Vettori, it was still a very competitive fight that should keep Hermansson intact in the middleweight top-10.

As for what’s next for “The Joker,” it’s clear based on the injury report that he will need several months off just to heal up after this bout. Look for Hermansson to return to the Octagon sometime later in 2021 as he looks to bounce back from the loss to Vettori and get back to chasing middleweight goal in the UFC’s stacked 185lbs weight class.

What do you think is next for Jack Hermansson after this loss to Marvin Vettori?