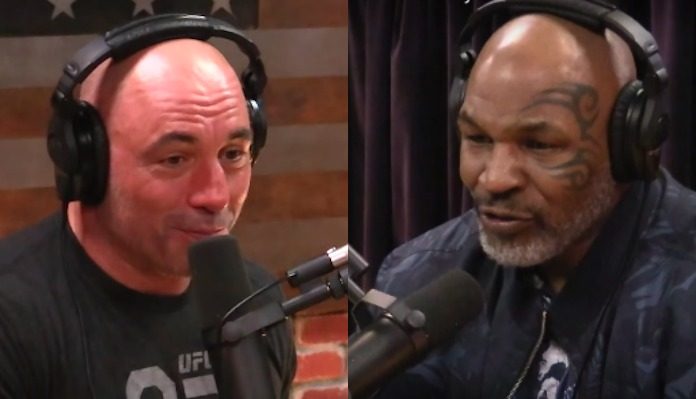 The future of UFC lightweight champion Khabib Nurmagomedov is currently quite murky. Although the undefeated champ has many exciting options — in several divisions — it’s not clear which one he’ll pursue. That being said, UFC commentator Joe Rogan has some interesting ideas.

Rogan unpacked the options of Khabib Nurmagomedov on the latest episode of his Joe Rogan Experience podcast, which featured heavyweight boxing legend Mike Tyson as a guest.

“What do you think Khabib’s gonna do now?” Tyson asked as Rogan on the show.

“He does whatever the f**k he wants to do,” Rogan replied. “That’s what I think. I think that guy’s probably the best lightweight of all time. He’s a monster.”

Joe Rogan then added that he’d like to see Khabib Nurmagomedov fight at welterweight, which seemed to excite Mike Tyson.

This comment from Joe Rogan generated a followup question from Mike Tyson.

“Who’s up there for him to fight?” the heavyweight boxer asked.

“First of all, Tyron Woodley, who’s the champ at 170,” Rogan replied. “That would be an insane fight. Georges St-Pierre, if he decided to come back, do a big a super fight, that’d be an insane fight. I think 170 has a lot of opportunities for him. But I think 155 does too, they just have to figure out who’s going to fight him.”

“He’s an international super now, Khabib. Especially the way he smashed Conor [McGregor]. Conor is such a superstar already that way Khabib won and did it so dominant, I think he’s roof though now. I think when he comes back, and people see the pay-per-view numbers for his fights, people are going to realize how huge this guy is. He’s so interesting. He’s very humble, he’s very polite, very well spoken.”

What do you think of this conversation between Joe Rogan and Mike Tyson? Do you think Khabib Nurmagomedov should move up to welterweight?