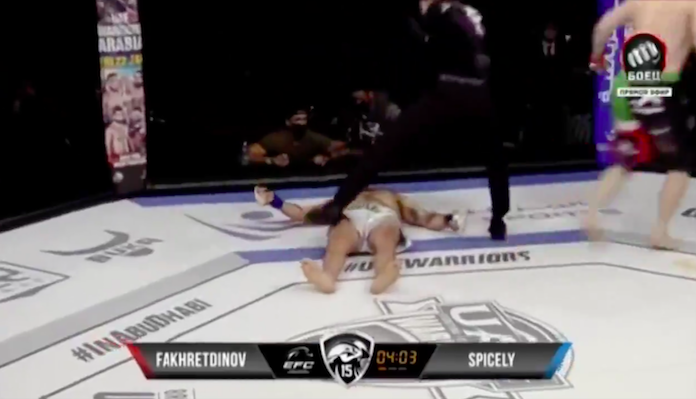 In his first fight since being released by the UFC last summer for failing to make weight for a UFC Vegas event, Spicely took on Rinat Fakhretdinov at UAE Warriors 15. In his first fight since June 2019, Spicely suffered an absolutely brutal KO loss to Fakhretdinov. The Russian landed a massive overhand right that absolutely floored Spicely in a vicious fashion, with some calling it similar to Dan Henderson’s infamous KO blow over Michael Bisping at UFC 100. Watch the video below (h/t Caposa).

Spicely (12-6) has been a professional mixed martial artist since 2013. The 34-year-old American won the first seven fights of his MMA career and was then signed by the UFC and featured on The Ultimate Fighter 23, where he lost to eventual winner Andrew Sanchez. Spicely was brought into the UFC despite that loss and overall racked up a 2-5 record in the Octagon over two stints in the promotion. His most notable victory was a submission over Thiago Santos at UFC Fight Night 95 in 2016.

This is the third knockout loss of Spicely’s career. He has previously spoken about mental health issues and brain trauma, so this loss could make him consider retirement.

Fakhretdinov (20-2) is a 29-year-old Russian prospect who looks like he could be UFC-bound after this fight, especially since White was in attendance for the bout. He is now on a 14-fight win streak overall, which includes wins over Spicely and another former UFC fighter in Alberto Uda. This was actually Fakhretdinov’s first fight since August 2019, so the fact he looked so incredible after such a long layoff is very impressive. There is no doubt he made a great impression with White right there.

Do you think Dana White should sign Rinat Fakhretdinov after knocking out Eric Spicely?