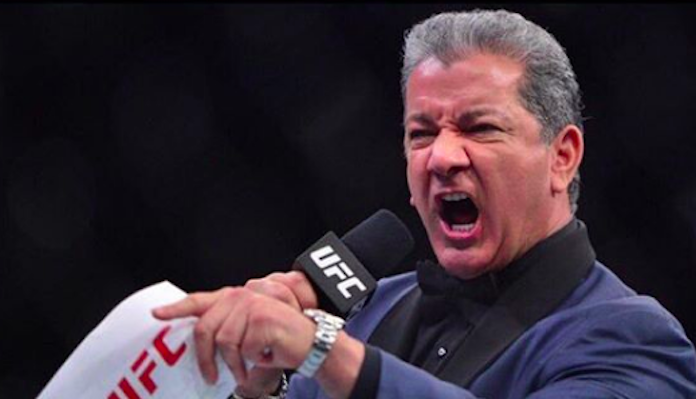 UFC ring announcer Bruce Buffer was hired by some guy on the Internet to help dump his girlfriend with a Buffer video on Cameo.

Buffer has been the lead UFC ring announcer for many years, but he is a man of many hats and has numerous other ventures outside of the Octagon. One of those is his Cameo page, as fans can hire Buffer to record audio and video clips with sayings of their own. Well, it turns one out fan took it to the next level and decided to enlist the services of Buffer to help him dump his girlfriend in the most savage way.

Our friends at Borrachinha Depot have the video of Buffer announcing the breakup.

Imagine that this is how you learned that you were being dumped 😭 pic.twitter.com/nKdHxPzAVp

“It’s time for Kaylee to move on,” Buffer says in his signature, booming voice.

It’s one of the most brutal ways possible to announce someone has broken up with you and the fact that the video is now making the rounds on the internet is a double whammy. Fans are already eating it up, of course. That Buffer could pull something like this breakup video off so smoothly is just a testament to what a professional he is. Sure, the subject matter is a bit on the touchy side, but Buffer made it entertaining.

Many past and present UFC fighters and other people in the industry have signed up for the Cameo service, so there are definitely ways to record your favorite fighters giving you a shoutout, wishing you a Happy Birthday, or in this case, announcing your breakup. Just remember to keep Buffer in mind for the next Cameo you desire.

If you could hire Bruce Buffer to do your Cameo, what would you want him to say?