Urijah Faber had ‘so much fun’ in Petr Yan scrap, not opposed to fighting again

Urijah Faber came up short against Petr Yan last weekend but he enjoyed every second of the fight.

To open the UFC 245 pay-per-view main card, Faber was looking to be the first person to hand the Russian a loss inside the Octagon. Yet, that did not happen as Yan knocked Faber out with a head kick in the third round. The UFC Hall of Famer was also dropped numerous times in the fight.

For Urijah Faber, he always knew the fight was going to be a tough one and says precision is what ended the fight, not Yan’s power.

“I knew that was going to be a nasty fight,” Faber said on Ariel Helwani’s MMA Show. “I knew that I would have a chance to catch him. But, he had a very good chance of catching me. To be honest, I came in the first round and I feel like I left the first round feeling like I’m faster than this guy. I felt his power and I wasn’t worried about his power. 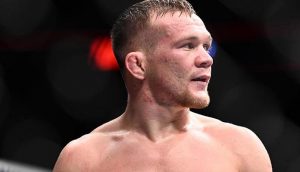 Although he lost a tough fight, Faber says he was having a lot of fun in there and doesn’t regret taking the scrap against the young up and comer.

Following the loss, it is back to the drawing board for Urijah Faber. He has retired once before. Yet, he says he is not opposed to fighting again and revealed his original plan was to fight four times when he was 40.

“I was thinking about doing four fights at 40,” Faber concluded. “I’m not opposed to [fighting again], but maybe I’ll do one on my 41st birthday, maybe on my 42nd birthday and call it quits. But no big plans to run through the division or anything. I’m not doing a fight just to have a fight.”

What do you make of Urijah Faber saying he had ‘so much fun’ in Petr Yan fight and still wanting to compete again? Sound off in the comment section, PENN Nation!