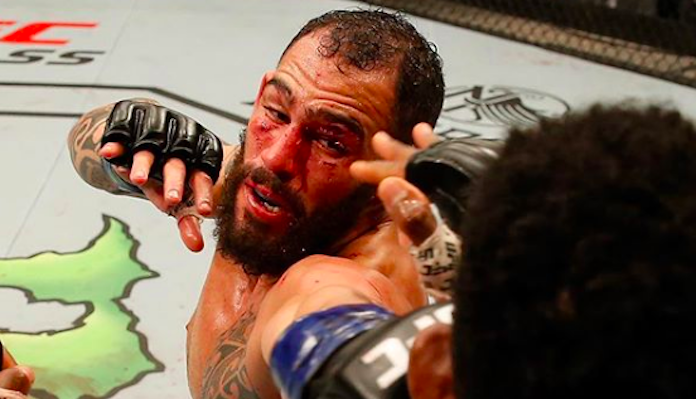 UFC welterweight Santiago Ponzinibbio is back in the top-15 rankings at welterweight, while Robbie Lawler and Khamzat Chimaev were removed.

Ponzinibbio defeated Miguel Baeza at UFC Vegas 28 via unanimous decision in a “Fight of the Night” performance by both men. It was an incredible fight, and Ponzinibbio is now being rewarded with a top-15 ranking once again. He has in fact re-entered the welterweight rankings at No. 13, and Muslim Salikhov broke into the top-15 at No. 15 following his unanimous decision win over Francisco Trinaldo last weekend as well.

With Ponzinibbio and Trinaldo now in, there had to be two fighters removed from the rankings, and those are Lawler and Chimaev. Both men have been inactive as of late and neither has fought since last summer, so inactivity likely played a factor in removing them from the rankings. Lawler is also on a losing skid so that likely placed a factor, too.

Aside from Poniznibbio and Salikhov, one of the other big winners at UFC Vegas 28 in Marcin Tybura also had a big week as he’s now ranked No. 8 overall following his TKO win over Walt Harris, which was his fifth win in a row. Not surprisingly, Harris dropped down three spots to No. 11 in the UFC rankings. Another winner on the card was Montana de la Rosa, who broke into the top-15 following her big TKO win over Ariane Lipski. That means that someone had to fall out of the rankings, and that was Antonina Shevchenko.

There was also another fighter who retired recently who has been removed from the rankings. In the UFC lightweight division, Paul Felder was removed from the top-15 following his retirement from the sport, and Arman Tsarukyan has taken his spot at No. 15.

Who do you want to see Santiago Ponzinibbio fight next now that he’s ranked in the top-15 again?