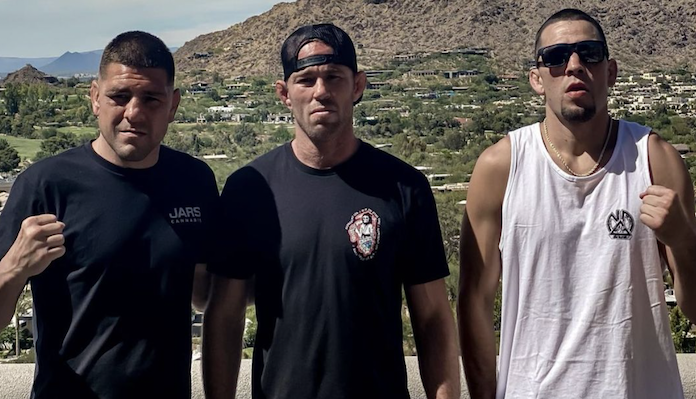 UFC welterweight superstar Nate Diaz posted a video of him heading to Arizona for UFC 263 along with the rest of his team the Skrap Pack.

Diaz takes on Leon Edwards on the UFC 263 pay-per-view main card. It’s the first fight in UFC history that is a non-title, non-main event that is set for five rounds. Both Diaz and Edwards are two of the best in the game and this should be a very exciting fight. UFC president Dana White has already confirmed that the winner of the fight will get a future welterweight title shot after Colby Covington gets his against champion Kamaru Usman.

Ahead of UFC 263, Diaz posted a video of himself heading to Arizona with the rest of the Skrap Pack for the Edwards fight. Check out the video of Diaz heading to the fight below.

This fight against Edwards is the first for Diaz since he lost via TKO (cuts) to Jorge Masvidal at UFC 244 in November 2019. Diaz took off all of 2020, as did Edwards, but he is now eager to return to the Octagon and get back into the mix at 170lbs. With a win over Edwards, Diaz would jump right back into title contention in the UFC welterweight division, so it’s a huge opportunity for him to get back into the cage and beat a top contender.

It’s also good to see that Nate’s big brother Nick will be in his corner this weekend at UFC 263, as he always is. Diaz is reportedly in talks with White and the UFC about a potential comeback, so perhaps he will talk to White and the UFC matchmakers and be able to come to an agreement with the promotion for a comeback to the cage later this year.

Do you think Nate Diaz will be able to beat Leon Edwards at UFC 263?