Blaydes (14-2 MMA) will be stepping foot in the Octagon for the first time since defeating Alexander Volkov by unanimous decision this past June. That win marked Blaydes’ fourth in a row, as he had previously scored victories over Justin Willis, Shamil Abdurakhimov and Junior dos Santos.

Meanwhile, Derrick Lewis (24-7 MMA) will enter tonight’s UFC Vegas 19 event on a three-fight win streak, his latest being a second round TKO victory over Aleksei Oleinik back in August. Prior to that finish, ‘The Black Beast’ had earned victories over Ilir Latifi and Blagoy Ivanov. 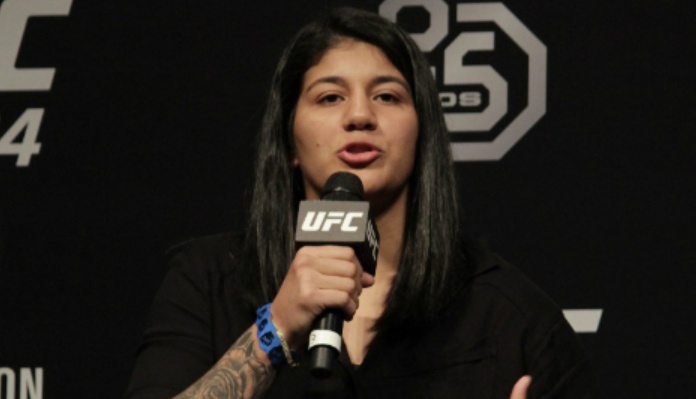 Vieira (11-1 MMA) will be returning to action for the first time since September’s UFC 253 event, where she scored a unanimous decision win over Sijara Eubanks. That victory got ‘Fenomeno’ back in the win column, as she had previously suffered a knockout loss to Irena Aldana.

As for Yana Kunitskaya (13-5 MMA), ‘Foxy’ most recently competed this past August, where she earned a unanimous decision victory over Julija Stoliarenko. That win marked Kunitskaya’s third in her past four fights overall.

In addition to Blaydes vs. Lewis, tonight’s UFC Vegas 19 main card also features two other heavyweight matchups. Former heavyweight champion Andrei Arlovski will be returning to the Octagon for a fight with Tom Aspinall, while submission specialist Aleksei Oleinik takes on Chris Daukaus.

Curtis Blaydes vs. Derrick Lewis – Lewis def. Blaydes via KO at 1:26 of Round 2

Chris Daukaus vs. Aleksei Oleinik – Daukaus def. Oleinik via TKO (punches) in Round 1

Andrei Arlovski vs. Tom Aspinall – Aspinall def. Arlovski via submission (rear-naked choke) at 1:09 of Round 2

John Castaneda vs. Eddie Wineland – Castaneda def. Wineland via TKO (punches) at 4:44 of Round 1

Julian Erosa vs. Nate Landwehr – Erosa def. Landwehr via TKO (Flying knee and punches) at :56 of Round 1

JUICY J!@juicyj_erosa poured it on to earn the TKO finish at #UFCVegas19 pic.twitter.com/CyVi1aYTtS

Shana Dobson vs. Casey O’Neill – O’Neil def. Dobson via TKO in Round 2

Drako Rodriguez vs. Aiemann Zahabi – Zahabi def. Rodriguez via KO at 3:05 of Round 1

Serghei Spivac vs. Jared Vanderaa – Spivac def. Vanderaa via TKO at 4:32 of Round 2

Who are you picking to win tonight’s UFC Vegas 19: ‘Blaydes vs. Lewis’ main event? Share your predictions in the comment section PENN Nation!