The Octagon was in France for today’s UFC Paris event, a twelve-bout fight card headlined by Ciryl Gane vs. Tai Tuivasa.

Tonight’s heavyweight main event proved to be a wild back and forth affair. Ciryl Gane got off to a strong start in the contest landing numerous good jabs and low kicks in the opening round. However, in round two, Tai Tuivasa was able to find a home for one of his power shots that sent the former interim title holder crashing to the canvas. The Frenchman was able to recover from the big blow and went on to hurt Tuivasa with body kicks later on in the second frame. Then, in round three, Gane put Tuivasa away for good courtesy of a nasty uppercut and then some hammer fists.

The co-main event of UFC Paris featured a highly anticipated middleweight contest that saw former division champion Robert Whittaker take on Marvin Vettori. The bout resulted in another strong performance from the former champion in Robert Whittaker. ‘The Reaper’ looked terrific in the standup department and was also able to showcase his world class takedown defense. Marvin Vettori looked visibly frustrated but showed a ton of heart as always. In the end, Whittaker was awarded the unanimous decision win from the judges in attendance. 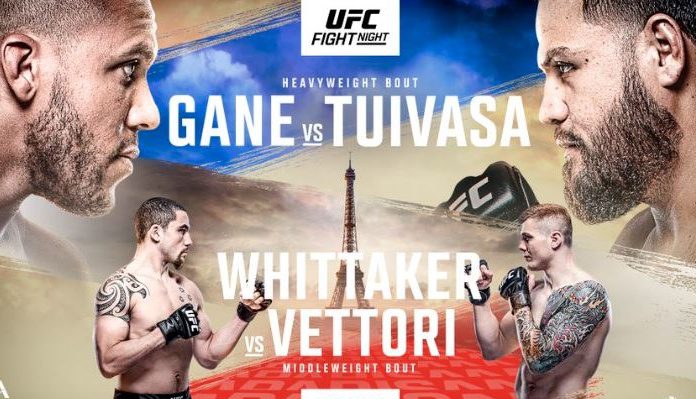 Fight of the night: Heavyweight fighters Ciryl Gane and Tai Tuivasa earned ‘fight of the night’ honors for their thrilling war in tonight’s UFC Paris main event. The Frenchman wound up winning the contest by way of third round knockout (see that here).

Performance of the night: Benoit Saint Denis pocketed an extra $50k for his second round TKO victory over Gabriel Miranda on today’s preliminary fight card.

Performance of the night: Abusupiyan Magomedov earned an extra $50k for his nineteen second knockout of Dustin Stoltzfus in today’s featured prelim.

Are you surprised by any of the performance bonuses handed out by Dana White and company following the conclusion of tonight’s UFC Paris event?