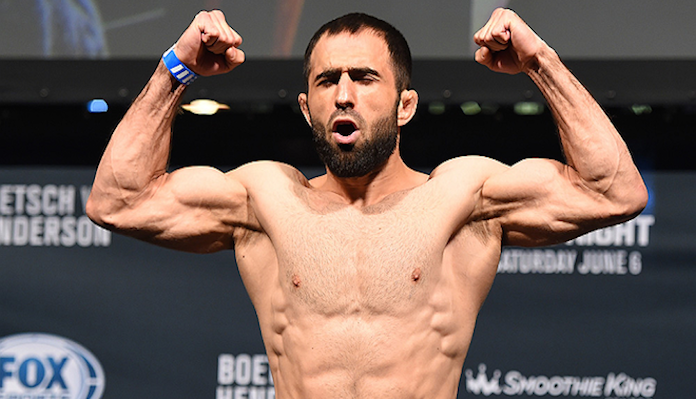 UFC on ABC 1 lost another fight as a middleweight bout between Omari Akhmedov and Tom Breese has been postponed for an extra four days.

Akhmedov vs. Breese was supposed to go down this Saturday night at UFC on ABC 1 in Abu Dhabi. However, the UFC announced that fight has been moved to UFC Fight Island 8 on January 20 instead due to COVID-19 issues. It’s not clear who tested positive, but it likely appears to be a case of contact tracking that led the UFC to wait a few extra days to book the Akhmedov vs. Breese fight. The two are now on track to step into the Octagon next Wednesday on the Chiesa/Magny undercard.

This is the second bout that UFC on ABC 1 has lost in the last few days. Over the weekend, it was revealed that featherweight Mike Grundy was injured and out of his fight against Nik Lentz. In turn, Lentz was moved back a week to fight at UFC 257 against Movsar Evloev. UFC on ABC 1 now goes forward with 11 scheduled bouts.

Akhmedov (20-5-1) is the No. 13 ranked middleweight in the UFC. The 33-year-old Russian has been in the UFC since 2013 and he’s gone 8-4-1 overall in the promotion. From 2016 to 2019 Akhmedov racked up a six-fight unbeaten streak, a winning streak that was finally snapped when he lost a decision to Chris Weidman.

Breese (12-2) is looking to make a splash and break into the UFC middleweight top-15 rankings. The 29-year-old Brit has been a member of the UFC since 2015, going 5-2 overall during that stretch. In his last outing on Fight Island last October, Breese scored an incredible knockout over KB Bhullar. The win earned him a bonus and a crack at finally fighting a ranked opponent in this bout in the form of Akhmedov.

Who do you think wins, Omari Akhmedov or Tom Breese?