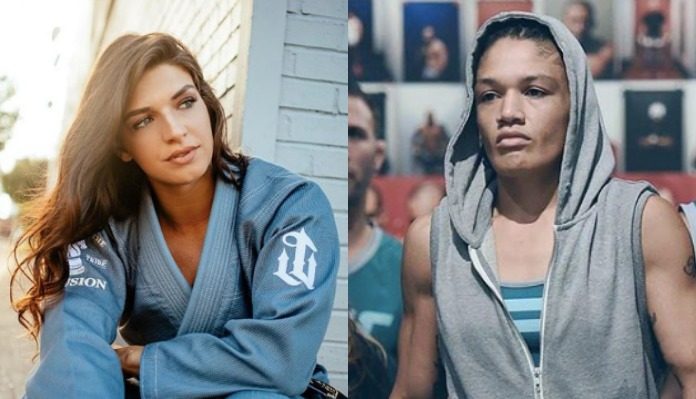 After a title shot was taken away from her, and her picking up a win at UFC 230, Sijara Eubanks has her sights set on another opponent. The Ultimate Fighter Season 26 finalist called out jiu-jitsu sensation Mackenzie Dern for a matchup.

Found this old gem…Hey @MackenzieDern how bout we run it back with the 4oz gloves! Let’s see who the realest bjj black belt in mma is! @AliAbdelaziz00 @danawhite @Mickmaynard2 pic.twitter.com/jVVyBMp8PB

“Found this old gem…” Eubanks said in a Tweet that included several pictures of a previous grappling match with Dern. “Hey [Mackenzie Dern] how bout we run it back with the 4 oz gloves. Let’s see who the realest BJJ black belt in MMA is!”

Eubanks (4-2) is coming off a unanimous decision victory over Roxanne Modafferi at UFC 230, who she already defeated last year on The Ultimate Fighter. Prior to that “Sarj” won her UFC debut defeating fellow TUF 26 cast member Lauren Murphy at UFC Fight Night 131 in June.

The 33-year-old has come under fire over the last year for missing weight twice in her UFC career. The first was her being hospitalized for a failed weight cut against Nicco Montano at The Ultimate Fighter 27 Finale which was for the vacant flyweight title. Then she missed weight earlier this month coming in at 127.5-pounds against Modafferi at UFC 230.

Mackenzie Dern (7-0) has also had her issues making weight both on the regional scene and in the UFC. In her last fight – where she defeated Amanda Cooper by first round submission – Dern came in seven pounds over the strawweight limit of 116-pounds. The 25-year-old has fought primarily as a strawweight in her career, however she did compete in a catchweight of 120-pounds at LFA 6 when she missed weight against Katherine Roy. She also competed at flyweight against Mandy Polk at LFA 24.

The California native has remained undefeated in her career, submitting four of her seven career opponents. As of now, there’s no word on whether Mackenzie Dern plans to move up to the flyweight division for her next fight.

Does a flyweight scrap between the BJJ specialists Mackenzie Dern and Sijara Eubanks interest you? Join the conversation in the comments section below.