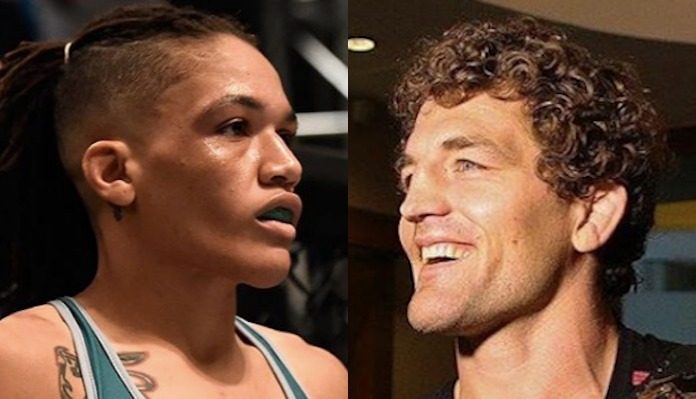 For a fleeting moment, Sijara Eubanks was expected to battle Valentina Shevchenko for the UFC women’s flyweight title in the main event of UFC 230, which goes down in New York City this Saturday night. After a wave of fan backlash, however, the UFC backtracked on this plan, and booked a heavyweight title fight between Daniel Cormier and Derrick Lewis to headline the card.

As you can probably imagine, this change didn’t go over well with Eubanks. Luckily, the UFC was able to keep her on the card, relocating her to an undercard scrap with Roxanne Modafferi.

“It’s easy to sort of get caught up in moaning and be mad, but it’s not going to help at all because the train is moving,” Sijara Eubanks told MMAJunkie of this drama. “Life goes on. … I gave myself some time to be pissed about it, but not much. The day that they took the title shot away, I re-signed for Roxanne that night, like 1 o’clock in the morning. I went to bed, like, pissed off, but by the time I woke up the next morning, I had no choice but to move on. I had a whole new opponent, a whole new camp.”

On Friday morning, Sijara Eubanks weighed in for her fight with Modafferi. Unfortunately, she missed weight for this fight, weighing in at 127.2 pounds — 1.2 pounds above the limit for not-title flyweights fights, and 2.2 pounds above the limits for title fights. What this means is that, had Eubanks fought Shevchenko in the main event and weighed the same amount, she would have been ineligible to win the title.

In a fairly unsurprising twist, many members of the MMA community were quick to express their disappointment in Eubanks. One of the first to do so was former ONE and Bellator welterweight champ Ben Askren, who recently signed with the UFC.

Crazy amount of immaturity. First acts immature about not getting main event at 3-2. Then doesn’t do her job and make weight. Time to grow up and be a pro. https://t.co/r59DQMg7gU

“Crazy amount of immaturity,” Askren said in his message to Sijara Eubanks. “First acts immature about not getting main event at 3-2. Then doesn’t do her job and make weight. Time to grow up and be a pro.”

What do you think of this comment from Ben Askren?