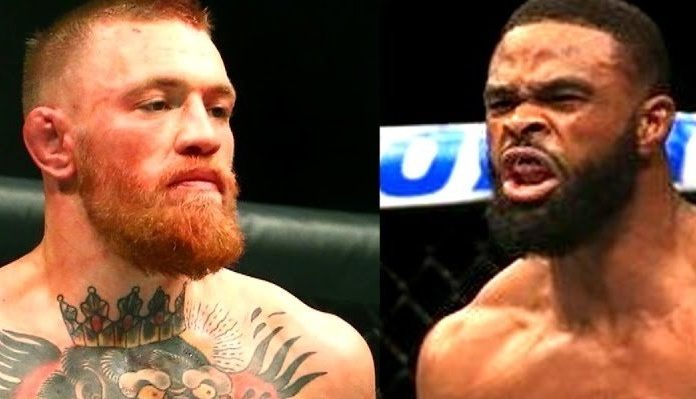 Conor McGregor recently divulged that he’s in negotiations for a return to the cage this July, but that he’s also still seeking an ownership stake in the UFC. Former UFC welterweight champ Tyron Woodley, who just lost the title to Kamaru Usman, doesn’t believe McGregor is in a position to be making these kinds of demands.

In an interview with TMZ, Woodley suggested McGregor fight him first. If the Irishman is able to clear that huge hurdle, he’ll be in a much more favorable position.

“I’d tell him, ‘Sit your ass down and fight Tyron Woodley at 170,’” Woodley said of a fight with Conor McGregor (transcript via MMA Fighting). “We both just lost in a world title fight. You ain’t in no position to call no shots. You lost, you started a huge religious, culture war, you just got into some smoke by smashing a fan’s phone, you’re constantly in trouble, you constantly get passes. You get through Tyron and we’ll talk.”

“I’m dead ass [serious],” Woodley continued. “I didn’t think about that until you just said it but I’m like, okay, he wants to fight [Donald] Cerrone – never been a champion. He wants to fight Nate Diaz – never been a champion. He wants a rematch of Khabib [Nurmagomedov] immediately, so do I. I don’t look like I’m getting an immediate rematch so it looks like we dangling around Conor. Come get this smoke.”

“Who makes sense for me to fight right now? I might as well fight Conor. Where you at Conor? Quit being a b*tch. Let’s fight.”

Do you want to see a fight between Tyron Woodley and Conor McGregor?