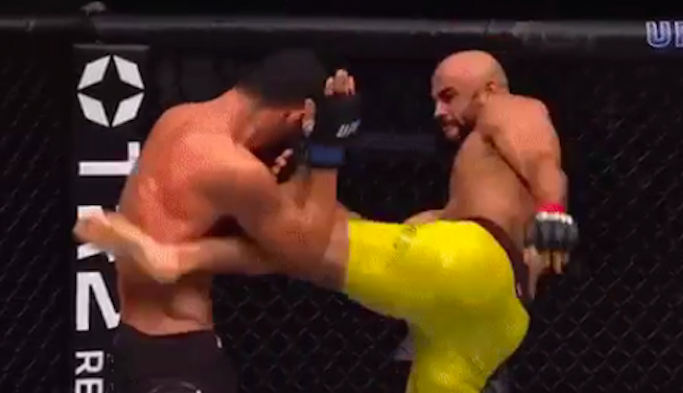 Lazzez was one of the big stars of the UFC’s first trip to Fight Island last summer. As a big underdog, “The Sniper” stormed into the Octagon and in his promotional debut took out Abdul Razak Alhassan via unanimous decision. It was a fantastic performance by Lazzez that earned him a share of “Fight of the Night” and there was a lot of hype behind him heading into his second UFC fight against Alves. Unfortunately for Lazzez, things did not go as planned.

Alves is an extremely explosive fighter in the first round of his fights and he showed how dangerous he is when he has stamina. The Brazilian landed three body kicks in a row to the body of Lazzez, crumpling the local fighter to the floor after the nasty body blows. It was a tough loss for Lazzez, who will lose a lot of his hype after getting stopped in such a lopsided fashion. As for Alves, it’s the kind of win that makes you remember why he won TUF Brazil 3.

Following UFC Fight Island 8, Lazzez took to his social media to release a statement about the loss. Check out what Lazzez wrote on his Instagram.

Some you win, some you lose, yesterday night I lost. I will comeback harder than ever. Congrats to Warlley.

Lazzez (10-2) drops to 1-1 in the UFC with the loss, but he’s been an exciting fighter in both of his fights. The Tunisian-born mixed martial artist lives in Dubai, so win or lose he will likely keep getting booked for fights on these Fight Island cards whenever the UFC comes back to Abu Dhabi.

What’s next for Mounir Lazzez after getting body kick TKOed by Warlley Alves?