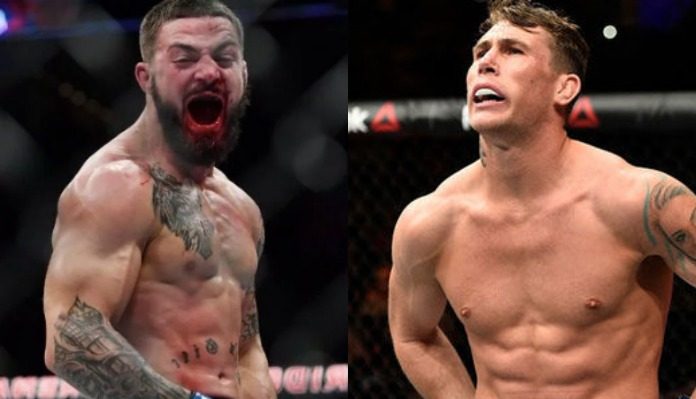 Mike Perry had some choice words for Darren Till after the Liverpool native pulled out of his scheduled UFC fight with Jack Hermansson.

Till (18-3-1 MMA) was slated to square off with the ‘The Joker’ on December 5, but was forced to withdraw from the contest due to injury.

Mike Perry (14-6 MMA) has been determined to get his fists on Darren Till for some time, recently suggesting he would move up to middleweight to make the bout happen.

“You said it years ago Darren Till and you were right. You and me were meant to fight. I’m going up to middleweight and I’ll be small and fast and you’ll be big and slow. I’m gonna ruin your life. You’ll be spitting out teeth much sooner than expected…” – Mike Perry wrote on Twitter last week.

Most recently ‘Platinum’ took to social media where he blasted Darren Till, suggesting the Liverpool fighter was a “pussy” for pulling out of the Jack Hermansson bout.

So @darrentill2 pussied out too. Smh everybody seems to have a sore coochie. Been shoving them rawdog beers directly up your ass for an instant effect like @steveo got ya walking funny? Had to pull out ? A real rawdogger don’t pull out pussy ! https://t.co/HqrKG5KHCd

“So Darren Till pussied out too. Smh everybody seems to have a sore coochie. Been shoving them rawdog beers directly up your ass for an instant effect like Steve-O got ya walking funny? Had to pull out ? A real rawdogger don’t pull out pussy!”

Before Mike Perry can get his hands on Till, the Florida native will first have to throw down with Tim Means at UFC 255.

‘Platinum’ is coming off a unanimous decision over Mickey Gall in his most recent effort this past June, a victory which snapped a two-fight losing skid.

Meanwhile, Darren Till has gone just 1-3 over his past four fight overall, with his lone win in that time coming over Kelvin Gastelum by way of split-decision.

What do you think of the recent comments from Mike Perry regarding Darren Till? Share your thoughts in the comments section PENN Nation!