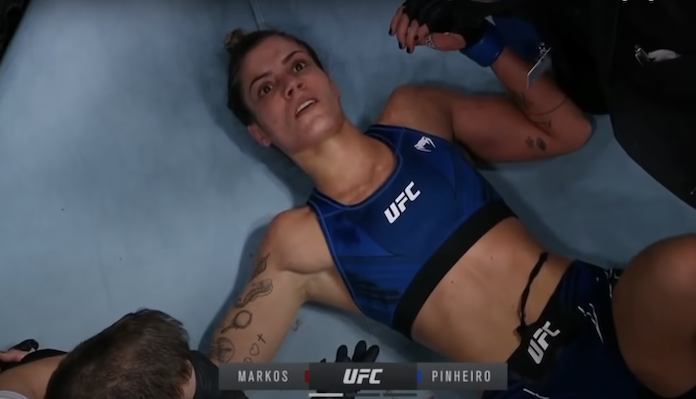 Pinheiro seemed to be on her way to victory after a strong start to the bout, only for an illegal upkick to alter the trajectory of the fight completely. Markos was disqualified with Pinheiro being awarded the win, with many fans questioning Pinheiro’s behavior in the lead-up to the decision being made.

Bisping, who was on commentary duty that night, had the following to say regarding the incident.

“Listen, a lot of people are suggesting that she was acting and I think that’s a little unfair, to be honest,” Bisping said on his Believe You Me podcast. “I spoke to some people and they thought she was hurt and some people said she was laying it on thick. I guess the only thing is, if you look when she gets hit in the face and I feel like this is why some people are maybe saying she was acting – and by the way, I’m not saying that, I think she took an upkick to the face and she was clearly dominating and she was on the path to victory before (the disqualification) – but look at her hands. The hands come back to catch herself. Watch as she hits the floor, she doesn’t catch herself but the hands go back. People are saying, ‘Well, if you’re knocked out, your hands wouldn’t go back to catch yourself.’”

“It’s worth mentioning that Luana Pinheiro, she was making her UFC debut after an impressive performance on the Contender (Series),” Bisping said. “She was dominating this fight. She was looking so f***ing good and then this (happened)… She gets upkicked in the face with toes, not the heel – the heel, obviously, hurts way more than the toes – and then the doctor comes over and she says “Is the fight over? Did I get knocked out or did I knock her out?” She said something that alluded to the fact that she wasn’t really sure where she was or what was happening.”

“The thing is, she was winning the fight, she was dominating the fight, however, she was struck with an illegal blow that clearly hit her hard enough to knock her back, really,” Bisping concluded. “Faking or not, that was initiated by the kick to the face that trajected her body back to the canvas. It was a hard shot, is what I’m trying to say. So she’s been hit with an illegal shot so realistically, it’s not her obligation to continue. Now, as a fan and as a former fighter, yeah, you say ‘I’m fine’ and you continue. As a fan, you want to see someone say, ‘Nah, f*** that. That’s not how I want to win.’ But if she is hurt, just like Aljamain Sterling – you’ve got to give Aljamain, be honest, same thing. He’s taken an illegal blow, he’s hurt, and if the referee disqualifies your opponent, that’s not really your fault. You shouldn’t take flak, backlash from the fans or anybody for that because you never pulled the trigger on that illegal move.”