Jake Paul and Eddie Hearn have upped the stakes for the highly-anticipated Amanda Serrano vs. Katie Taylor fight on Saturday.

Serrano and Taylor are set to become the first female main event in Madison Square Garden history between two of the best women’s boxers of all time. Taylor will be defending her WBA, IBC, IBF, WBO, and The Ring lightweight titles as Serrano is moving up to make the fight happen.

Although Serrano is moving up in weight, the Puerto Rican is no stranger to moving up as she is the only female to win world titles in more than four weight classes. Along with that, she holds the Guinness World Record for the most boxing world championships won in different weight-classes by a female, having held 9 major world titles across seven different weight classes. 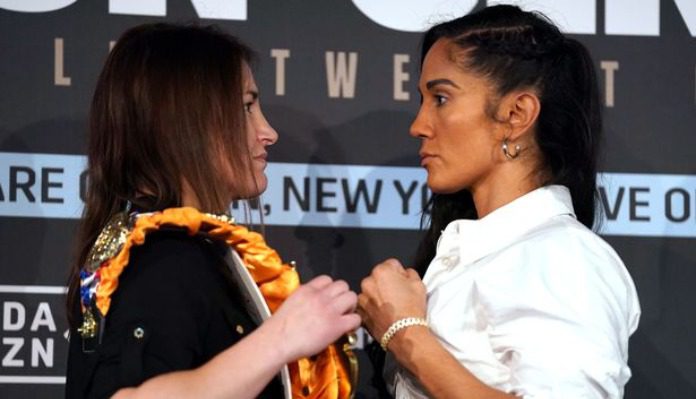 With that, the stakes are high for this fight, and to only add to it, Eddie Hearn who is Taylor’s promoter, and Jake Paul who is Serrano’s promoter made a $1 million bet on the winner of the fight at the press conference on Thursday.

Hearn: Maybe we can talk about a million.

Paul: Let’s do a million.

Paul: I bet Amanda wins for a million dollars.

Hearn: We’ll get it together, don’t worry.

Throughout the talks of the bet, Jake Paul wanted to shake Eddie Hearn’s hand but for the longest time, the Brit wouldn’t. But, after some more back-and-forth, he finally shook his hand signaling the bet is done.

After the bet was made, Paul then said if Amanda Serrano beats Katie Taylor on Saturday at MSG he would give Serrano the million.

What do you make of Jake Paul and Eddie Hearn making a $1 million bet on the Amanda Serrano-Katie Taylor fight?