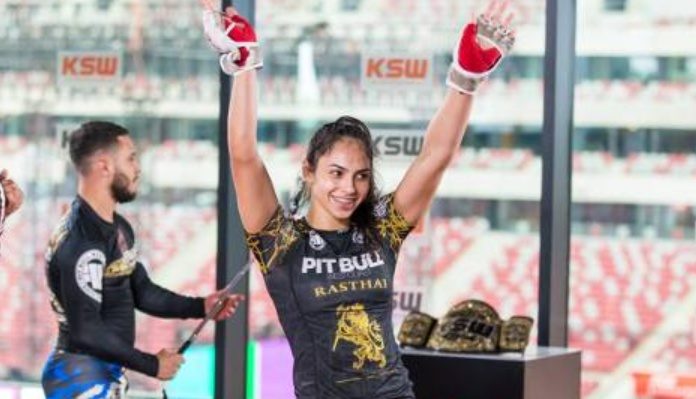 The UFC will crown their second ever flyweight champion at UFC 231. But before that happens, we’ll get to see the promotional debut of a future star.

The 24-year old former KSW flyweight champion Ariane Lipski is set to make her UFC debut on November 17 when she fills in for the injured Veronica Macedo to take on Maryna Moroz.

Brazil’s ‘Violence Queen’ is already considered one of the very best 125-pound fighters in the world and it was only a matter of time before she found herself on MMA’s grandest stage. And she couldn’t be more ready for the challenges that await her as she recently told Tatame.

“It’s a new phase in my career, but we’re looking forward to the new challenges. We knew it was a matter of time before this transition from KSW to UFC [would] happen. My dream has always been to become the best MMA athlete in my [division]. For that to happen, I need to face the best and the UFC has the best flyweight athletes in the world.

I want to fight for the UFC belt, that’s our goal, but I do not want to skip the line of other athletes who are looking for that chance too. I want to [earn] my place in the UFC. I am making my debut [against] an athlete who is not in the rankings [as a replacement for] another athlete who was injured, so winning the fight, we want a top 10 or top 5 opponent to be among the best in the category and then make the belt dispute.”

A superstar over in Poland as part of KSW, the 11-3 consummate finisher, and entertainer Lipski will surely have no trouble appealing to the American audiences she will now be putting her skills on display for.

Riding a nine-fight winning streak that consists of seven finishes (five KO/TKOs, two submissions) and two title defenses on her way into the UFC, Lipski is grateful for her time with KSW but in the end, they weren’t going to meet her long-term needs.

“KSW had a preference in the negotiations but it was a bit tricky for them to find opponents for me and it was also difficult to prepare to defend my belt knowing the names of my opponents just three weeks before the fight. Another motive that also weighed on my decision was the fact that we wanted to fight more often in the year and KSW was managing to do only two fights a year so we knew that the best option for my career would be to sign with the UFC and follow from there.”

Lipski has proven to always be a fighter to watch thus far in her still young yet established MMA career and the odds of that changing now are looking pretty slim.

As mentioned, The Violence Queen has already proven to be a top flyweight so it will be fun and interesting to watch how quickly her ascent through the ranks will be.