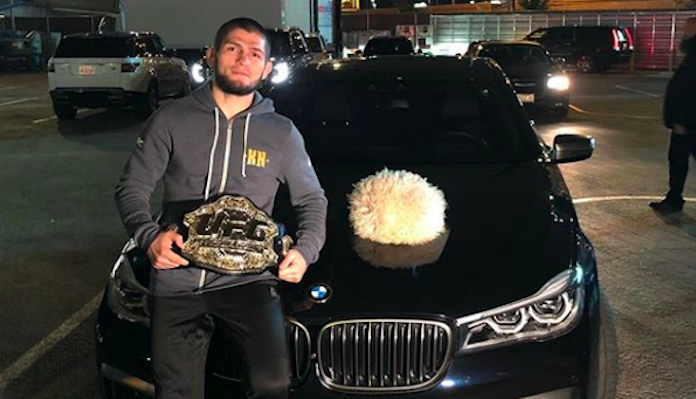 Undefeated UFC lightweight champion Khabib Nurmagomedov (27-0 MMA) is reportedly planning to no show his hearing with the Nevada State Athletic Commission this December.

The hearing, which takes place December 10, is expected to produce Khabib’s official punishment for his post-fight actions at UFC 229.

Incase you’ve been living under a rock that past month, “The Eagle” went crazy following his fourth-round submission victory over Conor McGregor at UFC 229. The undefeated Russian jumped out of the octagon immediately following his emphatic win at UFC 229 and proceeded to attack the Irishman’s teammate Dillon Danis.

Khabib’s actions sparked brawls to ensue both inside and outside of the octagon, which led to Conor McGregor being attacked from behind by members of Nurmagomedov’s entourage.

The Nevada State Athletic Commission has since provisionally suspended both Khabib Nurmagomedov and Conor McGregor, this while they perform a full investigation into the violent incidents that took place following the UFC 229 main event.

Needless to say, December 10 will serve as an important date in the careers of both Conor McGregor and Khabib Nurmagomedov.

However, despite the hearings importance, Khabib Nurmagomedov reportedly will not be in attendance on December 10.

Check out what “The Eagle” had to say in a recent interview with BeIN Sports:

“On December 10 they will meet again and call me but I’m not going. I just defended my family and my religion. If they want to punish me, they can get all the money I earn, and they can give me 10 years ban. I don’t care.”

“On December 10 they will meet again and call me but I’m not going, I’m not guilty. I started the fight and I finished as a man. They’ll punish the initiator, I won the fight in the rules. After the fight I showed him that what he did before the fight would not be unrequited.”

What do you think of Khabib Nurmagomedov’s decision to no show his December 10 hearing with the NSAC? Sound off PENN Nation!