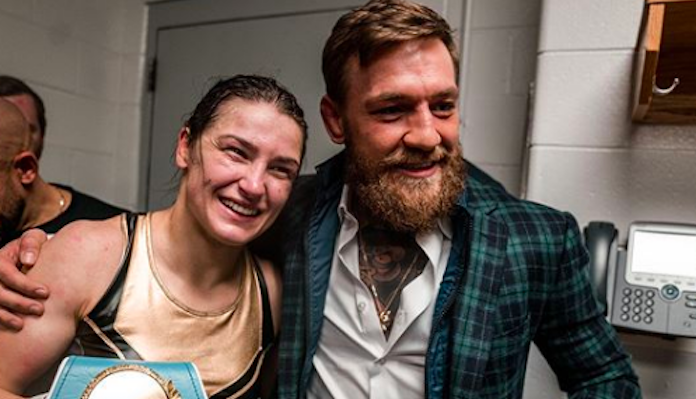 Katie Taylor doesn’t believe Conor McGregor gets the respect he deserves in Ireland and made her opinions known in a recent appearance on ‘The MMA Hour’:

“I messaged him after the Dustin Poirier fight, just to offer some words of encouragement really,” Taylor said (h/t MMAFighting). “He’s always been a fantastic support to me, but I think he’s just someone who’s actually transcended the sport. He’s like, for me, the Muhammad Ali of the UFC. He’s just a fantastic athlete. A great businessman as well. But what he’s done in the sport and the UFC has been absolutely incredible, and I don’t think he’s celebrated as much as he should be here in Ireland. I think he is an absolute global superstar and just a phenomenal athlete, and he’s always been a complete gentleman towards me.”

Taylor, an undefeated boxing champion and Olympic gold medalist doesn’t believe Conor McGregor gets the appreciation he deserves back home in Ireland for his accomplishments inside the octagon.“I just think he’s had a few controversial moments outside of the cage as well that people obviously didn’t appreciate,” Taylor said.

It’s complicated because the UFC star is a popular yet controversial figure in Ireland. McGregor, outside the ring, has had sexual assault allegations, altercations and arrests. This included punching an elderly man at a Dublin pub for “turning down a drink” and punching an Italian DJ at a luxury hotel in Rome.

Taylor continued,“But I’m looking at him as just a phenomenal athlete, and someone who I generally think has transcended the sport, someone who’s become bigger than the sport. Nearly every time he does fight, it’s an absolute huge event. He still gets the highest number of pay-per-view figures and he’s still the highest-paid athlete in the UFC. I just look at him as just an outstanding athlete, and I can’t wait to see him come back.”

Yes, McGregor has headlined all six of the highest-selling pay-per-views in UFC history and is listed as one of the highest paid athletes in 2021 (Forbes’ list). After suffering an injury in his loss to Poirier at UFC 264, he’s expected to return to the ring in 2022.

UFC President Dana White believes 2022 could be the perfect year for Nate Diaz and Conor McGregor to have their highly anticipated trilogy fight.

Do you think Conor McGregor gets a bad wrap in Ireland and who would you like to see him fight in 2022? Share your thoughts in the comment section PENN Nation!