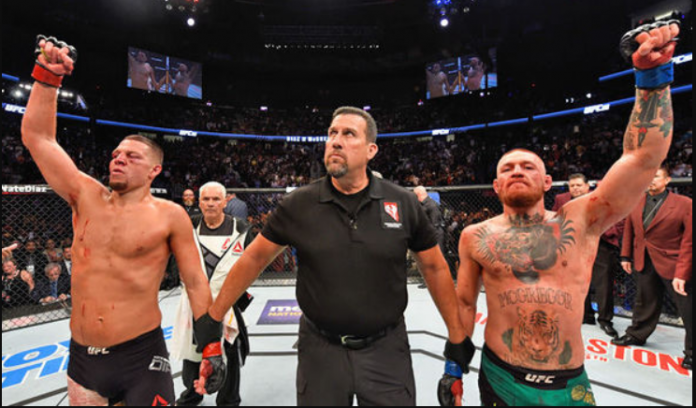 Diaz and McGregor of course have a long and storied history having fought two times in the past at UFC 196 and UFC 202. In the pairs first encounter, ‘The Stockton Native’ weathered an early storm from the Irishman before turning tide and putting Conor away with a rear-naked choke in round two.

In their highly anticipated rematch, Conor McGregor and Nate Diaz would go to absolute war for twenty-five straight minutes, with ‘Notorious’ emerging victorious by way of a razor thin majority decision ruling.

While that result seemingly tied up the rivalry at 1-1, ‘The Stockton Slugger’ shared his own take on his current score line with ‘Notorious’.

“He got finished off with a choke. That last fight didn’t even thangs out. He’s still far behind but it’s Gucci.” – Nate Diaz said in response to his series with Conor McGregor being 1-1.

Diaz (20-13 MMA) has not competed since June’s UFC 263 event, where despite mounting a late comeback – he ultimately suffered a unanimous decision defeat to Leon Edwards.

As for Conor McGregor, the former two division champion has been on the sidelines ever since suffering a broken leg in his trilogy fight with Dustin Poirier this past July at UFC 264.

With both men coming off of losses and in need of a good showing, UFC President Dana White believes 2022 could be the perfect year for Nate Diaz and Conor McGregor to have their highly anticipated trilogy fight.