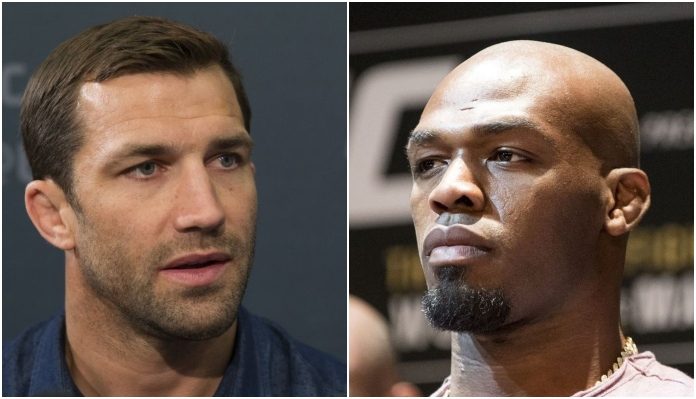 UFC 239, which went down on Saturday night in Las Vegas, was a big card for the light heavyweight division. In the second bout of the main card, former UFC middleweight champion Luke Rockhold made his debut in the division opposite Jan Blachowicz. Then, in the main event, divisional champion Jon Jones attempted to defend his title opposite Brazilian knockout artist Thiago Santos.

In the end, Rockhold came up short, succumbing to a second-round Blachowicz punch, while Jones successfully defended his title with a narrow split decision over Santos.

Ahead of this card, Luke Rockhold made quite a few comments about Jon Jones. It was the former middleweight champion’s belief that he would earn a fight with Jones if he beat Blachowicz, and that he had the skills to defeat the champion.

Most of Rockhold’s comments about Jones occurred in interviews, but speaking on Twitter on Sunday night, Jones divulged that he actually encountered the former middleweight champion on the morning of the UFC 239 weigh ins.

Jones claims Rockhold was “talking s**t,” and that he responded in kind.

“He actually was talking shit to me backstage after morning weigh ins,” Jon Jones wrote on Twitter. “The last thing I told him was, ‘you might want to find a way to exercise that jaw.’

With his loss to Jan Blachowicz, Luke Rockhold is now on a two-fight skid, having been knocked out by Yoel Romero in his last outing.

Jon Jones, on the other hand, remains the UFC light heavyweight champion and the sport’s consensus pound-for-pound king. With Santos vanquished, and Rockhold seemingly off the table, it’s not clear who he’ll fight next, but he certainly has options.

Do you think this is the end of the beef between Jon Jones and Luke Rockhold? Join the conversation in the comments section below.