Jon Jones and Israel Adesanya did not hold back in their latest social media skirmish. The pair, who are the UFC light heavyweight and middleweight champs respectively, went at it on Sunday night — and nothing was off limits.

Hey pussy you still there… @JonnyBones

“Hey p**sy you still there?” Adesanya wrote to Jones.

Jones then responded with an absolutely savage Tweet, referencing Adesanya’s infamous KO loss to Alex Pereira in the kickboxing ring. The light heavyweight champ was quick to delete this Tweet, but the Internet is forever. 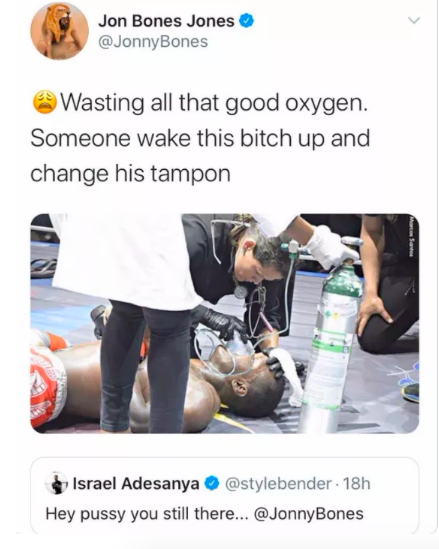 “Wasting all that good oxygen,” Jones wrote in his deleted Tweet, using a picture of Adesanya receiving oxygen after his loss. “Someone wake this b**ch up and change his tampon.”

Jones continued, reminding the world that he’s made some philanthropic efforts during the coronavirus pandemic, and lamenting the fact that people instead choose to focus on his latest legal trouble: an arrest for negligent use of a firearm and aggravated DWI. This Jones tweet was also deleted. 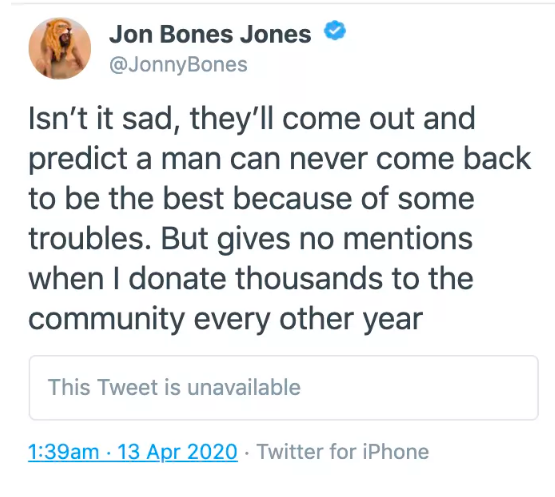 Adesanya then issued a scathing response to these deleted Tweets from Jones, referencing the light heavyweight champ’s multiple troubles outside the cage.

What do you think of this latest exchange between the UFC middleweight and light heavyweight champs?