Joe Rogan believes that there is only one man who deserves the next shot at current UFC lightweight champion Khabib Nurmagomedov.

According to the longtime UFC commentator, Tony Ferguson is the obvious choice to be the next man to challenge “The Eagle”.

Joe Rogan recently shared his thoughts on the UFC’s lightweight title picture, and explained why the promotion cannot deny “El Cucuy” the opportunity to try and hand Khabib Nurmogomedov his first career.

Check out his comments from the most recent episode of The Joe Rogan Experience.

“No, no, no. They’re not leaving (Tony) in the dust. (The UFC) are very serious about doing something with Tony Ferguson. Dana (White) has even said that (Tony) is most likely next in line for Khabib.” 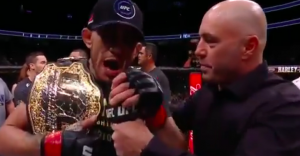 Joe Rogan believes that Tony Ferguson’s brilliant performance against Anthony Pettis at UFC 229 was more than enough to warrant a title shot with The Undefeated Russian.

“Tony (Ferguson) hasn’t lost in what is it, twelve fights? It’s an eleven or a twelve fight win-streak against guys like Edson Barboza, d’Arces him. Kevin Lee, triangles him. (Anthony) Pettis, Josh Thomson, Rafael dos Anjos, Lando Vannata… Dude, Tony Ferguson is a f*cking beast. He doesn’t get nearly as much attention as he deserves.”

Tony Ferguson is currently riding an eleven fight win streak, with eight of those eleven victories coming by way of stoppage.

Do you agree with UFC commentator Joe Rogan, should Tony Ferguson be the next man to challenge undefeated lightweight champion Khabib Nurmagomedov? Sound off PENN Nation!