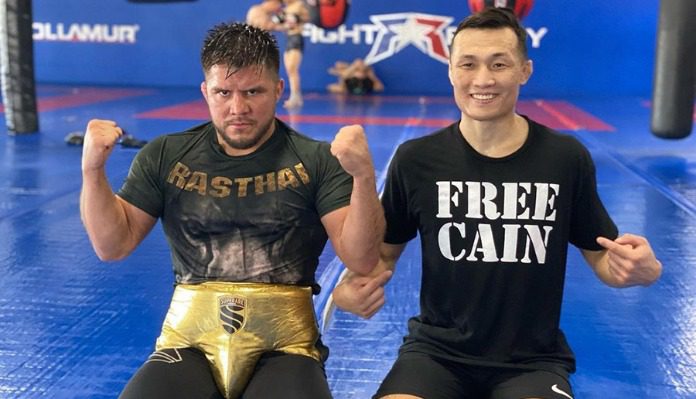 Henry Cejudo has all the confidence that his teammate, Korean Zombie will become the new featherweight champion on Saturday.

Zombie trains out of Fight Ready in Arizona and Cejudo has been coaching him for his title fight against Volkanovski at UFC 273. Although ‘Triple C’ was campaigning for the fight himself, but has taken a back seat to coach Zombie instead. Since working with him, Cejudo now believes this is a terrible style matchup for the champ as he believes Zombie will find the KO shot.

“Volkanovski’s greatest gift is his pressure but I’ve also been studying a lot of Volkanovski, I know exactly what he’s going to do in this fight,” Cejudo said on the first embedded episode for UFC 273. “He doesn’t produce any punching power, you know that’s the reason why I like this fight for the Korean Zombie because if he does decide to slug it out with the Zombie, Zombie’s gonna put him out. We got some recipes for him, so we are ready for his kicks, we’re ready for the smoke so by the time April 9 and that Saturday comes about we’re gonna be ready, man. We’re gonna be firing on all cylinders and the Korean Zombie will strike again.”

Korean Zombie does have KO power so it isn’t out of the question he could catch Alexander Volkanovski. Out of his last six wins, four have come by knockout and he has proven he is willing to stand and trade with opponents but whether or not Volkanovski will oblige is uncertain.

Zombie enters the title fight coming off the decision victory over Dan Ige back in June. UFC 273 will also be the second time he fights for UFC gold as he lost by TKO to Jose Aldo in 2013.

Do you think Korean Zombie will KO Alexander Volkanovski as Henry Cejudo says?