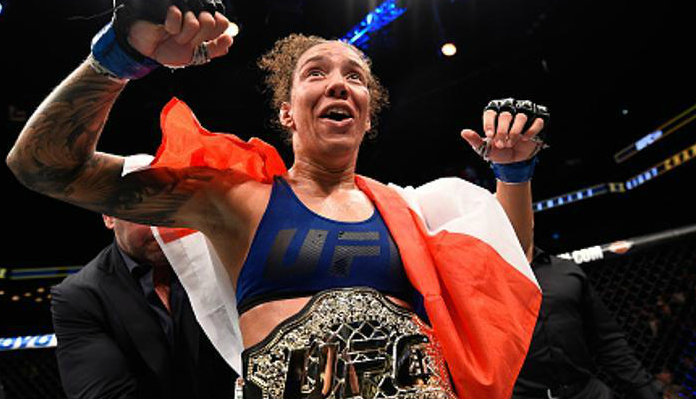 This weekend, in the main event of UFC Sacramento, former UFC women’s featherweight champion Germaine de Randamie will take on Aspen Ladd in a pivotal women’s bantamweight contender bout. If she’s victorious in this outing, she’ll be looking for a shot at redemption opposite reigning champ Amanda Nunes, who she lost to in 2013.

While De Randamie respects Nunes, she sees the champion as a beatable fighter.

“I agree she’s one of the best fighters, but remember: Everyone is beatable, and as soon as a person comes and beats Amanda Nunes, they are the GOAT,” de Randamie told MMA Junkie ahead of UFC Sacramento. “One thing is for sure, at this point right now in the last couple years, she has been the best UFC fighter. Without any doubt. She has proven it over and over again. But she is beatable. Everyone is beatable. So every time when somebody gets beat there’s a new GOAT, right? She’s the champion, she’s a true champion, and she’s an absolute world class. But she is beatable.”

That being said, Germain de Randamie recognizes the scale of the task at hand. She’s not looking passed Ladd.

“To be honest [the Nunes fight is] not something that’s on my mind,” she said, assuring she’s focused on Ladd. “A lot of people have asked me about the title shot as if this fight might be an elimination for the one next for Amanda. Right now I have one obstacle, and that’s Aspen Ladd. I cannot focus or look ahead of Aspen Ladd. That would be very disrespectful and very ignorant for me to do. My focus is absolutely on Aspen, and after Saturday night you can ask me the same question and I’ll have an answer for you.

Do you think we’ll see a rematch between Germaine de Randamie and Amanda Nunes in the future?