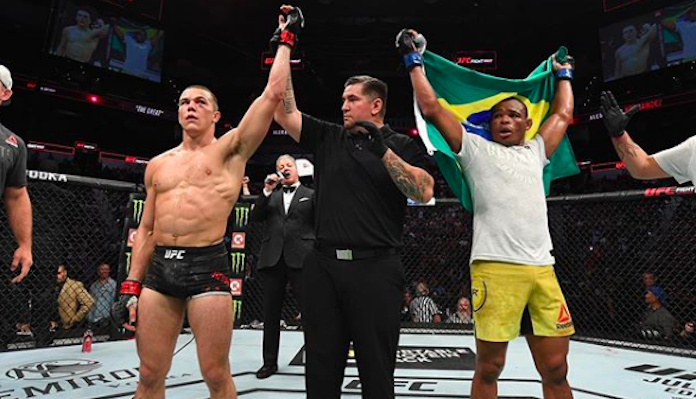 At UFC San Antonio, Brazilian lightweight contender Francisco Trinaldo lost a decision to Alex Hernandez — but not everybody believes the judges got their verdict right.

In fact, the widespread perception seems to be that Trinaldo did enough to win. The man himself certainly thinks he did, and is very disappointed in the cage-side judges for depriving him of a victory.

“I’m still a bit upset,” Trinaldo told MMA Fighting. “They shamelessly took the win away from me. I thought I was winning… I could have done more, trying to knock him out, but it’s tough. It’s tough to fight here. If they want to build this kid they have to start giving him easy fights, otherwise he won’t get anywhere. He doesn’t belong here. Everybody knows he won’t get anywhere.”

“He didn’t win one round. He didn’t land one strike that hurt me. Every strike I landed, he would open his eyes wide open. Just watch the fight. I know it’s not UFC’s fault, but these judges have to judge marbles tournaments instead. They suck. They took my win away and I’m the only one who was really harmed.”

Given the controversial nature of this fight, Francisco Trinaldo believes he should still be awarded a win bonus.

“If they want to put a win on his record, go for it, but I want my win bonus. I deserve it,” Trinaldo said. “I went there to put a beating on him and he just ran. Everybody saw I won. UFC employees were shocked, they don’t know how they gave that kid the win. The least they can do is give me my win bonus.”

The Brazilian also took a shot at his opponent for his reluctance to engage in the fight.

“I train hard every single say, focused, to come here and lose like that,” Trinaldo said. “This guy came here all cocky, feeling like a badass… I always say fighters fear no one so don’t come here mean mugging. This kid acts all cocky, but when the cage closes he’s a p***y. They want to turn this p***y into a man.”

How did you score the UFC San Antonio fight between Francisco Trinaldo and Alex Hernandez?