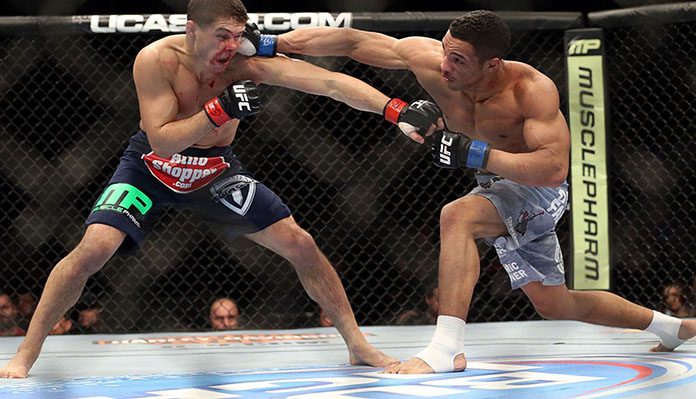 Lee and Iaquinta had first met at UFC 169 in February of 2014, with “Raging Al” emerging victortious by way of unanimous decision.

“The Motown Phenom” has won six of his past seven UFC appearances overall, scoring five stoppage victories in that span.

Prior to the setback, the Long Island native was riding a five-fight winning streak.

Tonight’s rematch lived up to expectations as Kevin Lee and Al Iaquinta went to war for twenty-five straight minutes much to the delight of the crown in Milwaukee.

After a competitive opening three rounds, Al Iaquinta was able to turn the tide in rounds four and five, smothering Kevin Lee with flurries of punches.

After five rounds of thrilling action, the fight went to the judges for decision. Al Iaquinta was awarded a unanimous decision victory with the scorecards reading as follows: 48-47, 48-47, 49-46.

Check out how the pros reacted to tonight’s UFC on FOX 31 main event below.

Wow!!! The score cards could be all over the place!! #UFCMilwaukee

We gonna do this or what fellas?? @TonyFergusonXT @TheNotoriousMMA

But I had it possibly tied going into the final and Al took the 5th! #UFCMilwaukee

Who would you like to see Al Iaquinta fight in his next octagon appearance? Sound off in the comments section PENN Nation!