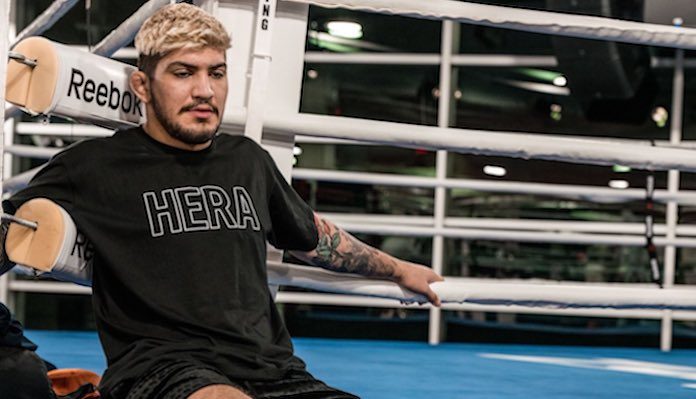 Dillon Danis didn’t hold back on social media yesterday. The New Jersey native trashed Tyron Woodley and his budding singing career in a Twitter post. He added the caption, “You know you hit rock bottom when you go to a Tyron Woodley concert.”

Danis shared footage of Woodley performing in (what appears to be) a club. He is rapping to fans who are filming the event. Everyone in attendance was impressed, but Dillon Danis certainly was not.

The former welterweight champion, Tyron Woodley last fought Kamaru Usman at UFC 235 in the co-main event, March 2019. He tried to defend his welterweight title belt, but his efforts were futile as Usman delivered a dominant performance and won by unanimous decision. Prior to Woodley’s loss, ‘The Chosen One’ maintained a strong two-year title reign and successfully defended against Darren Till, Demian Maia and Stephen Thompson twice.

Woodley is not ready to hang up his gloves just yet. He wants to reclaim the belt against Kamaru Usman and has been training with George St Pierre at Tristar gym. He also wants to feel what it’s like to fight the undefeated lightweight champion Khabib Nurmagomedov and believes he is ready for the catchweight bout challenge.

Whilst Tyron Woodley’s fighting prospects remain up in the air,  he has been keeping busy on other projects. ‘The Chosen One’ has focused on his career as an MMA analyst and rap star. In early 2019, he featured on a track by the Glacier Boyz and dropped bars with Wiz Khalifa. He also released a parody song of ‘Old Town Road’ where he took aim at Conor McGregor. Woodley went on to release a new rap song on August 2019 called ‘Money and The Love‘.

Naturally, the next step would be to make club appearances and it appears Tyron Woodley is well on his way to becoming an MMA rapper hybrid. What do you make of his performances? Do you think he has what it takes, or is he reaching a new low? Let us know in the comments.