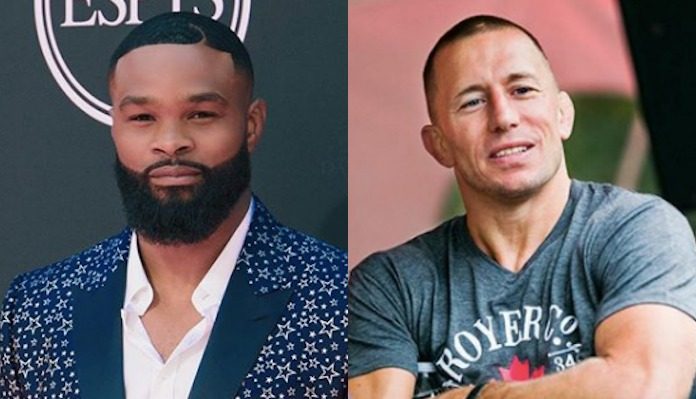 Throughout his impressive reign as the UFC welterweight champion, Tyron Woodley campaigned often for a fight with Georges St-Pierre, the former champion and the most dominant welterweight in MMA history.

Despite his best efforts, Woodley was never able to coax St-Pierre into the cage. Yet from the sounds of it, the two will now be getting very well acquainted with one another on the mats at the famed Tristar gym in Montreal, Quebec, Canada.

Tyron Woodley announced that he is training at Tristar, alongside Georges St-Pierre and under the watchful eye of coach Firas Zahabi, on the latest episode of Ariel Helwani’s MMA Show.

“It’s obvious we won’t be fighting anymore, so why not train with the best welterweight of all time?” Woodley said on the show.

St-Pierre, on the other hand, has not fought since November of 2017, when he returned from a lengthy hiatus to challenge Michael Bisping for the UFC middleweight belt. The Canadian defeated the Brit to capture the title, becoming one of just a few fighters in UFC history to hold titles in two different divisions. While has has since retired — and recently reaffirmed that he intends to stay that way — St-Pierre is reportedly still training regularly.

How do you think Georges St-Pierre and Tyron Woodley will benefit from training together?